5,000 people from 135 countries to become Irish citizens next week

Some 5,000 people from 135 countries are set to be sworn in as Irish citizens next week.

The 5,000 candidates, including people from the UK, Poland, Romania, India, Nigeria and Brazil, will attend citizenship ceremonies presided over by former High Court judge Bryan McMahon at the Killarney Convention Centre next Monday and Tuesday.

Citizenship ceremonies restarted in December 2019 after they were put on hold for five months when High Court judge Mr Justice Max Barrett ruled that any person applying for Irish citizenship could not spend a day outside Ireland in the year before applying. 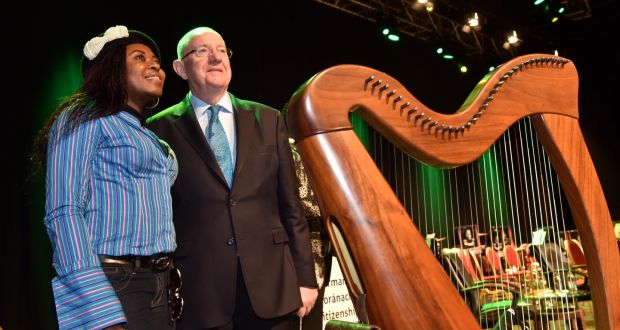 Mr Justice Barrett ruled in July 2019 that the Minister for Justice’s discretionary practice of allowing applicants six weeks out of the country, for holiday or other reasons, and more time in exceptional circumstances, was not permitted by law.

While applications continued to be processed, ceremonies were put on hold, leaving thousands of applicants in limbo and leading to a backlog of 20,500 people waiting to be sworn in as Irish citizens by a judge.

In November 2019 a Court of Appeal overturned the ruling that applicants for Irish citizenship needed unbroken residence for an entire year in Ireland before applying to become citizens.

The most recent ceremony in December saw more than 2,000 people become Irish citizens.

The Government had previously said it aimed to deal with the backlog by the end of February.

About 132,000 people from 180 countries have become Irish citizens since the ceremonies were first introduced in 2011.