Minister for Justice and Equality Charlie Flanagan has apologised over the way the plantation of Cahersiveen went ahead.

The Minister for Justice Charlie Flanagan has written an unprecedented letter to the people of Kerry apologising for what has unfolded at the controversial direct provision centre in Cahirciveen.

The centre, which opened unexpectedly on March 18, has been mired in controversy following an oubreak of the coronavirus in mid-April. At the latest count, 25 people in the hotel, including three staff, had been infected with the virus.

Once residents tested positive they are moved from the hotel to a location where it is possible to self isolate.

Local people, politicians and groups representing asylum seekers have all called for it to be shut down.

However, the minister has instead written a 1,500-word open letter to “apologise and explain” to the people of Cahirciveen in particular.

The apology which takes the form of an open letter is being published in local newspapers in Kerry.

In it, he said: “On behalf of Minister Stanton and myself, I want to apologise most sincerely to the people of Cahirciveen for the way in which we had to open the Direct Provision Centre in the Skellig Star, but I also want to outline why we had to do it in the way we did.”

The minister writes that it was necessary to open the centre with short notice in response to the Covid 19 pandemic and this was why there wasn’t an opportunity to engage with the local community.

In early March, my officials realised we needed new centres and we needed them quickly.

"It was not tenable in a health emergency to have large numbers of international protection applications in emergency hotel accommodation, sharing facilities with other guests.” 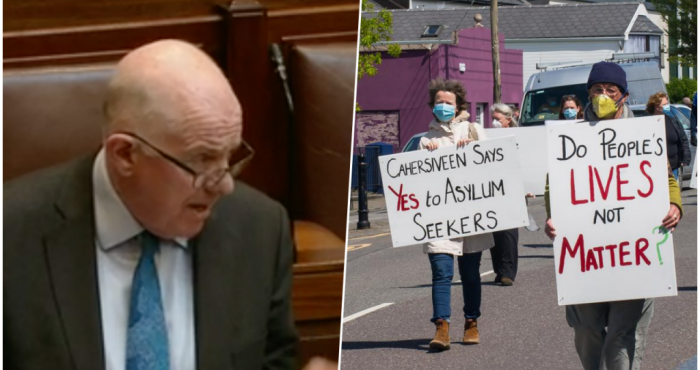 However, he does not address the fact, as reported in the Irish Examiner, the department had visited the hotel with a view to using it as a centre some six months earlier which would have left ample time for consultation with the community.

The letter goes on to address allegations that the outbreak originated with an asylum seekers who had been transferred to Cahirciveen from a hotel in Dublin where the virus was known to be present.

“There have been suggestions that we knew of that case and recklessly allowed transfers to proceed despite it and despite the risk it posed to public health. I want to categorically deny that. My department was never told of that case.”

The open letter goes on to state that much is now being done to make life easier for the remaining residents in the hotel.

The centre, which is currently home to fewer than 70 people, has infection control measures in place and it has plentiful supplies of sanitising materials, masks and other PPE as needed.

While 22 residents who tested positive have been moved, at least four others returned to Dublin within days of arriving at the centre.

These, mostly women, had been working in the capital and wanted to return to their jobs after being given 24 hours notice that they were to be moved to Kerry.

The Irish Examiner has also learned that the hotel is currently short-staffed as some of the staff have had to self isolate at home as a precaution.

The hotel in which the centre is now housed was sold last December to a company owned by businessman Paul Collins, who runs a number of direct provision centres.

He bought the company which held the lease, Skellig Hotel Experience, in which Kerry TD Michael Healy Rae was a shareholder.

Mr Healy Rae had initially stated that the company had no direct connection to the hotel but when the Irish Examiner presented him with evidence he conceded that was the case.

He also initially stated that he did not know to whom the hotel was sold but last Friday he told Radio Kerry that he was in the room last December with Mr Collins when the sale documents were signed.

The TD said that at no point before or after the sale was he aware it was to be a direct provision centre, until he found out days before it opened.