Gardai Won't Be Able To Police Movements In Midlands Lockdown

Midlands lockdown will not be enforced with legal penalties, but will this stop the destruction of jobs and small businesses?

Gardaí cannot take enforcement action against anyone from counties Kildare, Laois or Offaly if they decide to ignore the localised lockdown and travel outside their county because regulations signed into law on Saturday provide no penal sanctions for ignoring the movement restrictions.

As part of the restrictions announced by the Government on Friday, residents of these areas were advised not to travel outside their county unless for urgent reasons, such as to care for a relative, in a bid to limit the possible spread of Covid-19, following a sharp spike in cases in these counties.

On Saturday Garda Headquarters outlined its policing of these restrictions and said there would be highly visible policing in place Kildare, Laois, Offaly and surrounding counties, as well as checkpoints and a permanent presence on relevant motorways and associated off ramps under Operation Fanacht.

While there would be additional gardaí drafted into these three counties, supplemented by personnel from the nine surrounding counties, Garda Headquarters said there was “no enforcement element to Operation Fanacht”.

New regulations under the Health Act 1947 were signed into force on Saturday in relation to the midlands lockdown, including measures stating people from the three counties “shall not” travel outside their home county, unless they have an urgent or work-related reason.

However, that provision is not enforceable under law.

This contrasts with the enforcement under previous phases of lockdown since the outbreak of Covid-19 in the Republic when measures restricting the movements of people outside a specified radius of their homes; of either 2km, 5km and then 20km, were supported by penal provisions.

That meant when people were stopped at Garda checkpoints and found further from home that the allowed distances, without a reasonable excuse, they were told to cease their journey and return home.

If they refused to comply with that direction, they could be arrested, or their name and contact details taken, and a criminal process could commence against them. 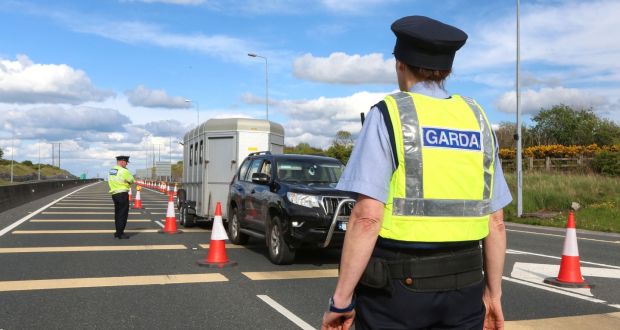 However, under the new regulations relating to the lockdown for Kildare, Laois or Offaly, the measures instructing people to stay in their home counties, unless they have a reasonable excuse, do not contain a penal sanction.

Senior Garda sources said it appeared the Government and Garda Headquarters had opted for light touch enforcement of the movement restrictions and would rely on people taking personal responsibility and responding to requests from officers.

Garda checkpoints have been set up in the three counties to deter people making unnecessary journeys and encourage them not to do so, the source said.

Only two aspects of the new regulations in relation to Kildare, Laois and Offaly are “penal” provisions, meaning they can be enforced by the Garda by means of arrest and prosecution.

The Irish Times has learned that enforcement is possible against businesses which breach the new measures and also against people found to be organising public gatherings in breach of the measures.

These include organising events in a manner that breaches the regulations and allowing members of the public access to premises where such access is not permitted for the duration of the two-week lockdown.

If people breach these provisions a criminal process could be commenced against them, which could result in conviction before the courts punishable by a fine of up to €2,500 and/or a term of imprisonment up to six months.

This has been made clear in briefing material being distributed within the Garda.

Cafes, restaurants and pubs operating as restaurants have been told to close their premises to the public but can still operate a takeaway service or have outdoor dining for a maximum of 15 people, with strict social distance.

Hotels cannot take in any additional tourist guests but existing guests can remain and new guests can be facilitated if they need accommodation for “essential non-social and non-tourist reasons”.

Members of the public are also not permitted to visit long-term residential care facilities, acute settings and prisons, save for critical and compassionate reasons, including end of life situations.

In response to the policing of the new restrictions on the three counties, Garda Commissioner Drew Harris has extended the “Covid-19 contingency rosters” in An Garda Síochána until the end of the year.

This means the emergency measure of organising most members of the Garda to work 12-hour shifts - four days on, four days off - will remain until at least December 31st.

“This decision takes account of outside events in relation to the Covid-19 situation, where the numbers testing positive in the population have been increasing in recent days,” correspondence from Garda Headquarters to the Garda staff associations stated of the rosters that have increased Garda man hours by 25 per cent.