Sinn Féin: “Far-right disinformation” is “hacking into the minds” of Irish troops

Sinn Féin have put in a submission to the Commission on the Defence Forces, warning of the alleged danger of “far-right disinformation hacking into the minds” of Irish soldiers, posing a “serious threat to democracy itself.”

In possibly one of the most melodramatic and bizarre submissions ever written, Sinn Féin Defence Forces spokesperson Sorca Clarke and John Brady TD vaguely describe how unnamed “right wing groups” are “weaponizing the online space”, which they say “offers a means to hack into the minds of individuals.” They even include a graphic of code from the movie The Matrix in the submission to emphasise the point (that’s not a joke, they actually did). 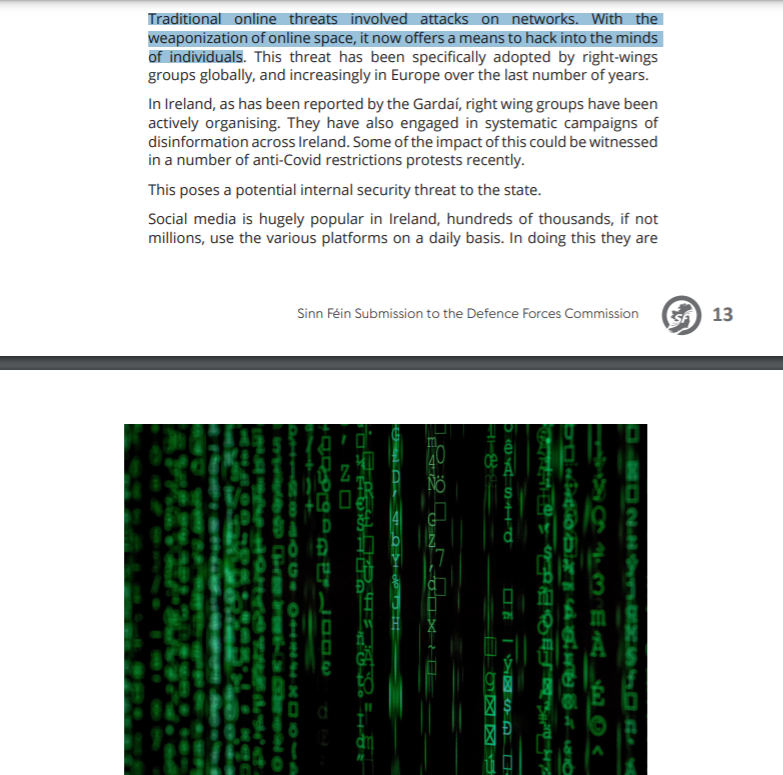 “Sinn Féin believes that it is incumbent on the Department of Defence to introduce a programme of digital literacy for members of the Defence Forces to ensure that they are given the tools to protect themselves from disinformation assaults on social media,” the submission reads, adding later that these are mainly promoted by “right wing groups.”

No examples are given of this “disinformation”, mind you. They don’t specify what types of information it is, who is spreading it (other than that they are apparently “right wing”), or what the precise goal is, except to “influence behaviour.”

The language in the submission is that of the military, describing “disinformation assaults, hacking into your mind”. They talk about the “weaponization of communication”, which they describe as a “new form of warfare” in a “new battlespace”. They say it “poses a potential internal security to the State ” and “democracy itself”. Listening to this you’d swear terrorists were trying to get their hands on nukes or something. The whole thing reads like a script for the next James Bond movie. Talk about drama.

When you stop and think about it, literally all they’re discussing here is online information – presumably from Facebook pages, memes, WhatsApp groups, and so on – which Sinn Féin believes to be false, and which some Irish soldiers may find interesting and want to read for themselves. That’s it. When you get down to brass tacks and strip away all the OTT hysterical hand-wringing, this is the horrifying “threat to democracy” that they’re wetting themselves over: other people reading information they believe to be wrong.

Of course, the first logical question one would have to ask at this point is who gets to decide what is and is not disinformation? I wasn’t aware that Sinn Féin had a crystal ball granting them access to all absolute truth in the universe, to instantly know when something is true or false at a glance.

Take the World Health Organisation, for example, who this time last year stated that “there is no specific evidence to suggest that the wearing of masks by the mass population has any potential benefit.”

Or take the HSE, who said that there is “no evidence” to support the wearing of surgical masks by healthcare workers or private individuals who aren’t sick.

Presumably if in March of last year an Irish soldier had dared to disagree with the all-knowing and esteemed “health authorities” by choosing to wear a mask to work, our friends in Sinn Féin would have decried them as deranged peddlers of “disinformation” flying in the face of the wisdom of the State.

Now that the authorities have changed their mind on that issue, however, if you say you don’t believe in the effectiveness of masks, you’re a “far-right loon” and a “threat to democracy” somehow. Disagreeing with the official position of the authorities on anything is “disinformation”, even when they change their minds. You’re not entitled to any opinion other than the one that is sanctioned by the authorities and appointed bodies.

The submission goes on:

“Disinformation campaigns designed to cause disruption and dissent within society have become prevalent over the last number of years. These campaigns have been initiated by both foreign and domestic actors.”

No evidence of this is provided either of course – no examples are given that “foreign actors” have launched disinformation campaigns within Ireland to “disrupt” our society. This is a little reminiscent of Fianna Fáil claiming that their Government formation was only a shambles because pesky “Russian bots” interfered (like Fianna Fáil needs outside help bungling a project).

In fact, if anything, we have evidence to the contrary, with Twitter themselves confirming last year that they see no evidence of politicised bots influencing covid debates in Ireland.

It’s one of those things that politicians just say, and the media never presses them on it to get evidence or make them justify their claims. It’s like a knee jerk reaction: “People are saying and doing things we don’t like? Must be foreign interference.” One might go so far as to call it a “baseless conspiracy theory.”

“These campaigns are designed to influence behaviour. They target what individuals read, how they think, and how they act. This weaponization of social media offers a potential threat to democracy itself. They are designed to be constant and unrelenting. Running every minute of every day.”

“They target what individuals read, how they think and act” – is that not the entire function of information? All information influences the way you think and act. Mainstream news media like RTÉ is “constant and unrelenting” in its attempt to influence how you think. That’s literally the entire point of the media.

When you have a chat with your mate at the bar and he tries to convince you that Apache Pizza is better than Dominoes, he is trying to “influence how you think.” That’s 95% of human interaction. How is promoting ideas you believe in a “threat to democracy itself”? If anything, that’s the definition of democracy and a free society – being free to express ideas and try to talk others around to your way of thinking.

If Sinn Féin think that campaigns to influence people’s beliefs and actions are wrong, then I’d call on them to not campaign or advertise at the next election. Put your money where your mouth is, lads.

They also go on to describe how the storming of the US Capitol building in January featured several members of the US armed forces, and that this apparently shows a similar danger here.

“That serving and former members of the US Armed Services were deliberately and effectively targeted by domestic actors in the prelude to the assault on the Capitol in Washington in January is a matter of record…We need to be clear that the commitment, loyalty, and integrity of the Irish Defence Forces is without question, and a matter of clear and enduring record.”

And what exactly does American right-wing propaganda being directed at US troops have to do with the Irish Defence Forces? I think someone should do Sinn Féin a favour and remind them what country they live in. I would imagine that they’ve spent so long mimicking Democrat talking points, i.e. trying to give citizenship to illegals, that they get confused at times.

“In Ireland, as has been reported by the Gardaí, right wing groups have been actively organising. They have also engaged in systematic campaigns of disinformation across Ireland. Some of the impact of this could be witnessed in a number of anti-Covid restrictions protests recently. This poses a potential internal security threat to the state.”

OK – let’s pretend for a moment that what these groups are talking about is actually “disinformation” and total insanity. Let’s say, hypothetically, that people were running around talking about how alien reptile men run the earth, and the sun is actually a giant disco ball, and Leo Varadkar can read their mind. Just total and utter hogwash.

People are legally allowed to believe and say whatever daft insanity they like, provided it’s not criminal i.e. a threat or a call to violence. It’s not the area of the police, or the military, or the government to chaperone “the Truth”. It’s not the right of Sinn Féin to deprive people, including soldiers, of the right to believe anything they like, up to and including baseless lunatic nonsense, if that’s what they’re into.

If a crime has been committed, or there is indication that one might, like troops plotting to attack the State or something, that’s a criminal matter and should be investigated. But where is the evidence that that’s a risk in this country? None has been provided, because there is none.

In fact, the only Irish troop killed by political extremism in the last 50 years was Private Patrick Kelly who was, ironically, shot dead by the IRA in 1983 while trying to save a kidnapped shopkeeper. Sinn Féin has never apologised for that incident as it happens, and the culprit was never caught.

I’ve yet to hear of a dreaded “far-right extremist” murdering any member of our armed forces. Who poses the bigger threat to the Irish military?

Ireland is a country that’s been under lockdown for an entire year. Our most fundamental rights have been suppressed by the government, with the help of the opposition parties like Sinn Féin – from our right to travel within our own country, to our right to work, to worship, to attend funerals and weddings and baptisms. We can’t protest in the streets, we can’t demonstrate, most of us can’t feature on television. We’ve lost every liberty to express ourselves as a people. And now that we have one final free domain left – our thoughts and words, the right to express ideas online – parties like Sinn Féin want to deprive people of that too.

The ideas that individuals hold in their minds are none of anyone’s concern, least of all politicians, and any party that thinks they have a monopoly on the truth is only exposing their own arrogant elitism and contempt for the intelligence of the general public.