The Irish General Election is on the Horizon!

Leo Varadkar has announced that he is to meet with the leader of Fianna Fáil, Michael Martin, to set a time frame for the next General Election, with February or March the most likely possibilities.

As I have have promised my supporters, I will be registering to put my name on my ballot, throwing my hat into the ring and running in my native county of Donegal to take down the corrupt pigs that have driven our nation into the ground.

This is a golden opportunity for nationalists to stand up and be counted. The mood in the country has changed dramatically over the last number of years.

Mass immigration, well-publicised government corruption scandals and the destruction of rural Ireland and our farming industry has finally forced the Irish people to stand up and take notice.

Right now, there is not ONE conservative patriotic voice in the Dáil. The coming election gives us the opportunity to change that.

Along with myself, there are a large number of other patriots running to shake the establishment and break the two party system that has dominated our state since its foundation.

The Irish Freedom Party has made waves over the last year but it is The National Party, run by Justin Barrett, that stands the best chance of causing a major upset in 2020.

The Niall Boylan Show recently has a large survey and asked voters, if given the choice today, who would they give their vote to. See the results below: 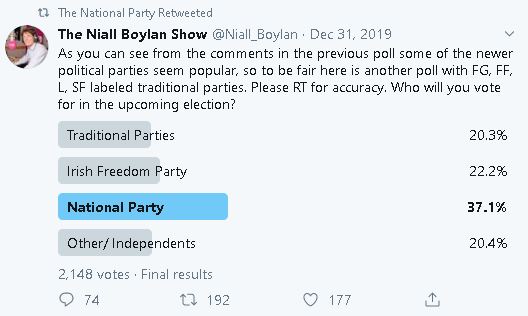 This is great news for patriots all across Ireland. The National Party Vice President, James Reynolds, has high hopes for his party in 2020 and going by the recent polls, it is not surprising.

The National Party has been building for almost Four Years and even avoided local and European elections to prepare for these very elections. If the polls are in fact accurate, The National Party can be expected to gain somewhere in the region of 50+ seats. This will be the biggest rise by any party since Sinn Féin rose to become the biggest party following the Easter Rising and the execution of its leaders.

Now, I do plan to run and WIN in Donegal, but I would encourage all patriots to get fully behind The National Party in every other county and return fellow patriots to our Parliament.

In Summary, I want to thank all my supporters thus far and I hope I can count on you in the weeks ahead as I and my fellow patriots fight it out with our EU-backed lackies for the heart and soul of Ireland!