Republican Socialists claim Catholic Nationalist Sean South as one of their ilk, but he was one of us. Remember a devout Catholic patriot this coming New Years Day on the 63rd Anniversary of his death.

Most true Irishmen and women are familiar with the rousing rebel ballad ‘Seán South from Garryowen’, and there can be few among us who haven’t loudly joined in the chorus at one time or another. 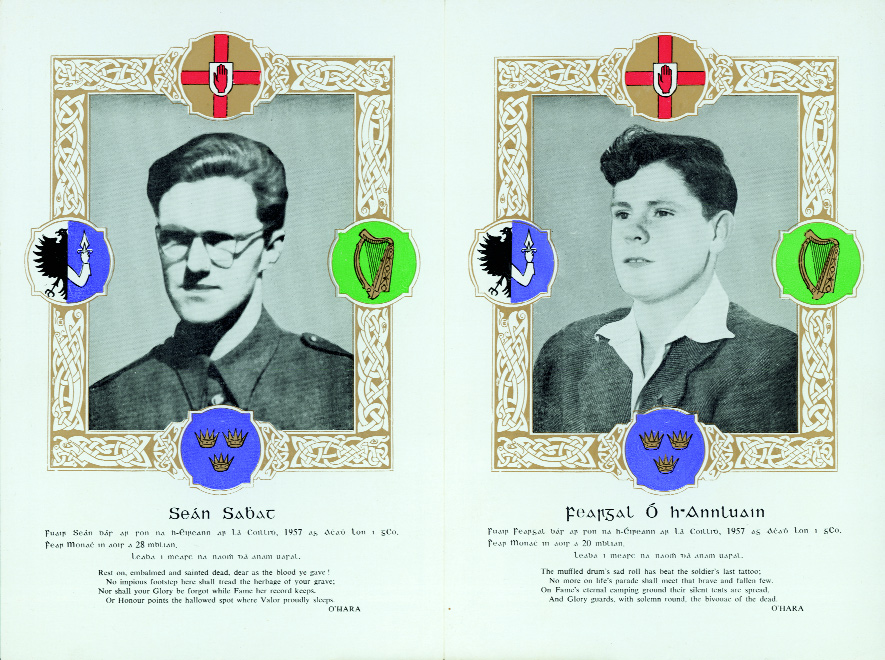 When the shout goes up “…there were men from Dublin and from Cork, Fermanagh and Tyrone”, the last county mentioned is sure to get a roar. Ironically, there were no Tyrone men involved in the attack being sung about. The particular Volunteer referred to as a Tyrone man hailed from the Tullysarran region of north Armagh, a region claimed by neighbouring East-Tyrone.

The leader of the IRA guerrilla column engaged in the 1957 attack was, though, a Limerick man, and none other than the remarkable Seán South from the parish of Garryowen.

Born in 1928, South, or Sabhat as he preferred, was every inch the quintessential Irish Patriot. Educated by the Christian Brothers in Limerick, he later worked as a clerk in a local wood-importing company.

All his free time though was dedicated to his robust promotion of Irish Patriotism and his fierce devotion to the Catholic Faith. Virulently anti-Marxist and uncompromising in his opposition to Masonry, Sabhat’s conservative Catholicism was remarkable even for the time, which was when the Catholic Faith was strong in Ireland.

He was also a powerful Irish language enthusiast and spoke the native tongue at every opportunity, whether his listeners understood him or not. Later IRA contemporaries of his often complained that when he was giving them training in arms and drilling, he did so through the medium of Gaelic. Refusing to compromise even when they protested that they were unfamiliar with the language. Sabhat’s outlook was that they should then learn to speak Irish as knowledge of the language was even more important than familiarity with weapons or marching.

Seán Sabhat was also a founding member of Maria Duce, a fiercely conservative, Catholic organisation, in Limerick. Led by anti-Communist campaigner Fr Denis Fahey, Sabhat edited their journals An Gath and An Giolla.

Although not known to have been a member of Ailtirí na hAiséirghe, an influential organisation that wanted Ireland to be run as a Catholic State, he was nevertheless very comfortable with the group’s right-wing outlook and the IRA that Sabhat later joined had swung decidedly away from the Marxism of the 1930s and 40s to being a more militant nationalist republican army with strong Catholic beliefs.

Sabhat shared the Irish separatist maxim that the British state had to be driven from Ireland, by force of arms if necessary, and the partition of the country ended, if Ireland was ever to be considered a proper, independent nation. And with this in mind, he was to the forefront of the IRA’s new military offensive against the British state in the north-eastern six-counties of our country.

‘Operation Harvest’, as this offensive had been coded, began on December 12th, 1956. Its tactics were modelled on the IRA Flying Column assaults on British army and RIC barracks and ambushes against the notorious Black-and-Tans and Auxiliaries during the 1920s campaign, which were instrumental in forcing the British from 26 of Ireland’s 32 counties.

The courageous young men from Munster and the south of Ireland, who spearheaded the 1950s offensive were soon to find themselves shocked by the state of the Irish nationalist, Catholic population then living within the six-county statelet that was dominated by Unionists based in their parliament in Stormont.

The phrase most often used to describe these northern Catholics was ‘cowed down’. Since the introduction of Partition in the early 1920s, the British had used the artificially constructed protestant unionist majority to administer their rule in that part of Ireland still under their direct control.

Institutionally defined prohibition, discrimination in employment, voting and housing was shamelessly used to keep Northern Catholics down and in their place. Despite having large families, Catholic numbers were kept low through the encouragement of mass emigration. Terror tactics against Catholics from the RUC and the locally recruited all-protestant B-Specials did the rest.

Today the British use Stormont-based Sinn Féin to administer their rule in the six-counties and this pseudo-republican party does Britain’s bidding by shamelessly promoting contraception, abortion, homosexuality and attendant perversions within the nationalist community in an effort to keep our numbers down and pacified.

Unhappily, Seán Sabhat was one of the first casualties of the 50s campaign and he was mortally wounded alongside a Monaghan teenage Volunteer, Fergal O’Hanlon, during an attack on the RUC Barracks in Brookborough in Fermanagh.

The huge funeral turnouts that accompanied Sabhat’s remains on their way back to Limerick, were, nonetheless, a testimony to the reverence in which the Irish people held this great patriot and the ideals for which he lived and died.