A Grave Tragedy Amidst A Host Of Tragedies

While the people of Ireland undergo unprecedented hardship, suffering is felt by our most vulnerable celebrities.

It was reported today that U2 guitarist, known to the world as " The Edge" (named apparently in honour of 'St The Edge of Finglas' , patron saint of constipation) has shared his suffering with the world. To be more precise, the pro abortion "Christian" entertainer lamented his isolation and his want for a pint. No doubt access to a pint of lager or stout could possibly  take the "edge" off  him as he studies some journals to fill his mind with more political correctness horse sh#t,  which he will eventually, and very irritatingly, lecture to the world. 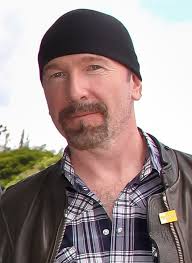 Despite the suffering endured by the most vulnerable people in Ireland during this worrisome pandemic, the news media have decided, in their infinite wisdom, to use their finite platform to concentrate their efforts in informing the ignorant plebs about the most awful plight experienced by Mr' The Edge' of U2 fame. Of course, Mr 'The Edge' is not the only celebrity struggling in these unprecedented times as other misfortunate celebrities are desperately trying to cope with the horrific shortage of Gucci Bikinis and non binary bread toasters. They speak of unimaginable and justified torment.

In concentrating on the trivial, the media conveniently fill their pages with column after column of celebrity nonsense while ignoring far more important stories such as; the degradation of the elderly, the onslaught of mass migration, the habitual  destruction of Irish culture, the persistant vilification of Christianity not to mention the wholesale treason taking place at the highest levels of governance.

No doubt many have found the story of Mr 'The Edge' inspiring, putting all other tragedies into perspective. Take for example a father and his 3 young children. The young father forloughed from his job and unable to pay his mortgage, then sadly losing his wife, a Nurse, to the coronavirus and leaving his kids without a mother. However, fear not, the family gained comfort knowing that Mr 'The Edge' was sharing their pain as he too bravely battled against immeasurable suffering. In his case mourning the loss of a pint while couped up in his big mansion. Mr The Edge, I salute you, you sir are a true modern hero.