Was the Ardee graffiti urging support for The National Party a foolish blunder by young supporters or was it a tactic of our Anti Irish political enemies to slander the name of authentic Irish nationalism?

The name of An Páirtí Náisiúnta, The National Party, has been dirtied in recent days by an unseemly graffiti in Ardee in support of the party. No right minded nationalist would recommend such a foolish action, it can only end in disrepute for a political movement and will surely be used as propaganda by the Globalist opposition.

This raises an important question however, was this graffiti a foolish blunder by an otherwise well meaning, patriotic young man or was it a deliberate and malicious attack on the otherwise good reputation of the National Party? At present this question remains unanswerabe however, this method of "Black Propaganda" has been in use by the far left across the Western world for a good number of years now.

We in Síol na hÉireann believe that although no culprit has yet been found for this act of vandalism, a healthy dose of scepticism is advisable here. We would not be in any way surpised if certain elements on the political left would vandalise property in a similar fashion and attempt to smear the name of Síol na hÉireann or other nationalist groups in doing so.

Details on the incident have been reported in the local press:

Local Sinn Féin Councillor Pearse McGeough said that when he saw what had been written he was was appalled. The graffiti has been reported to the Council so it can be removed.

“The people of Ardee are among the best in the country and they do not share these racist sentiments. The community in Ardee are just that, a community and do not tolerate such racism.” 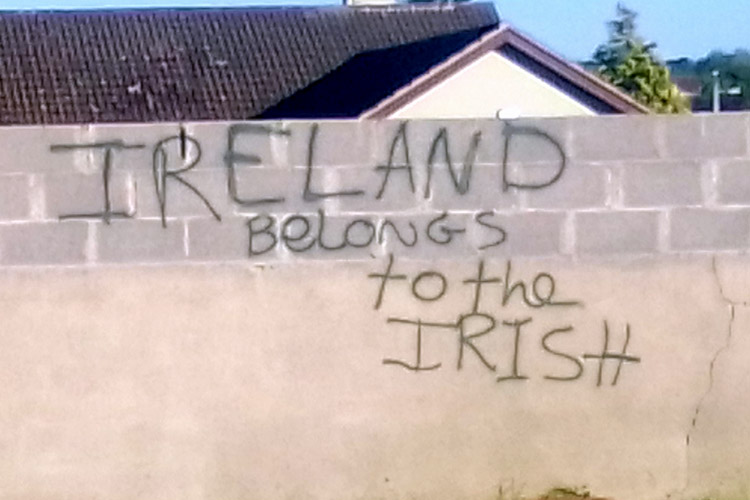 Cllr McGeough said the Railway walk is enjoyed by people of the area and has become especially valuable lately due to the Covid 19 restrictions.

“Families use it regularly and I am disgusted to think that children will see these comments, especially children who may have foreign national parents.”

“I want to send a strong message to those who did this. It is this kind of act that is not wanted here. You have disfigured the landscape with your vile comments. Ireland is growing into a multicultural place to live and work and people should not be afraid to live or work here.”

Cllr McGeough added “I want to reassure those that have settled in Ardee that this cowardly act was carried out by a very small minority and they do not represent the good people of the area. Racism will not be allowed to gain momentum and communities across this island will work hard to ensure that. Racism should be and will be opposed at every level.”

“Working class areas are a prime target for hate groups. Where resources are low, for example a housing shortage, these groups will attempt to sow the seeds of hatred by using the ‘immigrants, taking our houses’ mentality instead of directing their blame where it belongs, government policies. It’s always easier to blame those who are vulnerable or in a minority. That’s unacceptable.”

“It’s time the government enacted the long overdue hate legislation so people who carry out hate crimes at any level can be punished accordingly.

“There is no appetite for the extreme right parties or individuals in this county, you only have to look at the results of the last election when a representative running on a racist platform only got a handful of votes. They failed to get a foothold in Louth and that’s not going to change anytime soon. I have worked and represented the people of Ardee for many years and can tell you, these sentiments are not reflective of the community.”

To those who spray painted the walls “cop on to yourselves. Do something productive for your community instead. Indeed, it may suit you better to return to education and learn how to spell.”