Before The Cock Crows

Easter is upon us and the doors to the churches are shut around most of the country. The “land of saints and scholars”, a moniker given to Ireland because of its rich Christian tradition, may soon be replaced with the more accurate “ the land of Sodom and begorra!”.

The Catholic church is in rapid free fall. The decline of the faith, a phenomenon shamefully applauded by even some nationalists who are not only ignorant of history but worse, demonstrate immense disrespect to the memory of our forefathers ( many of whom, it should be painfully recalled, suffered great persecution owing to the fidelity to their faith), has utterly changed, for the worse, the moral landscape of the nation for generations to come.

While the main stream media revel in the demise of Christianity across the West, at the same time conveniently ignoring the fact that it was Christianity that effectively gave birth to western civilisation in the first place; harnessing, adapting and applying the knowledge acquired from the Romans and Greeks to Christian theology. What the detractors of Christianity don’t realise, or perhaps do realise, is that by eliminating the Christian bedrock of the West you eliminate the essence of the West; its core values, beliefs and attitudes. By tampering, degrading and removing the ethical foundations of a culture you leave a hollow replica that will collapse in on itself.

How did we get to this position? A different explanatory tale exists for every nation amongst the brotherhood of western nations. Ireland’s rapid divorce from Catholicism, I would argue, is attributable to a perfect storm of converging factors: The loss of national identity by divesting itself of its own sovereignty and nature ( sold off piecemeal to corporations, international organisations and other interests), the unsuitability of many impious candidates into the religious (many of whom led very unchristian lives resulting in abominable abuses), the rise of accessible international means of communication e.g. the internet, which allowed naïve and fertile minds to be corrupted from external ideas that were damaging to the fabric of society ( e.g. feminism, sexual liberation, Marxism etc), the Celtic tiger and its insatiable thirst for consumerism, and finally, mere opportunism taken by radicals and degenerates who occupied the media and academia who spied an opportunity to slay a weakened institution. 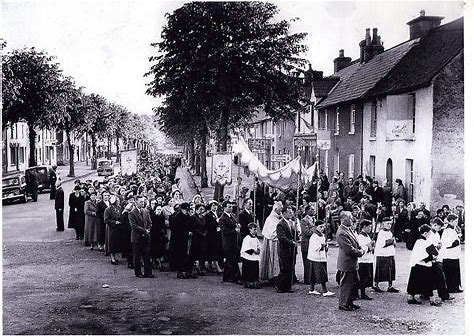 Regretfully, the most despicable contributions to the spiritual decay has been the subsequent submission of the church hierarchy to the zeitgeist. Its failure to censure priests “ coming out” on the altar to the applause of a congregation catechised with lukewarm faith, or admonish radical clergy for diluting Christian belief with their politically correct relativism has caused immense damage to the corpus of the church and by extension to society in general. The abject apathy of the hierarchy, at times tremendous silence, directed towards abominations like abortion and same sex marriage,in contrast to the raucous deference to promoting culturally approved causes like climate change and mass migration, has illustrated the cowardice further.

The decline and indifference can be personified by one man. If we pay attention to the most prominent cleric in the land, Diarmuid Martin, Archbishop of Dublin, the appalling state of the church is laid bare. In an interview given to the Irish Times on the 19th of April 2019 in response to the question,

“Looking back after almost 50 years as a priest, if it was today would you join the priesthood?

The most powerful clergyman in the country insipidly replied,

“ I don’t know. The difficulty is that I would have grown up in a very different society. I might have gone in another direction and have nothing to do with the church”.

If there was any doubt as to the Archbishop's lack of tenacity and fight the prominent clergyman later in the same interview announced a vague capitulation to secularism when he said,

“The Irish church, if it wants to survive and flourish, has to change and over come some of the ways it is entrapped...the church has to understand difference.”

To read between the lines the most powerful leader in the Irish Catholic church declared  that the immaculate bride of Christ must cowardly genuflect to the individualistic whims of society rather than the church standing firmly and defiantly against self centred depravity.

On this Good Friday, the doors are locked for the first time in centuries and the clergy’s response has been unadulterated complicity. While understandable measures were taken to halt the spread of covid19 attempts made to circumvent whole closures were not discussed in any depth let alone implemented. Moreover, this present abdication of leadership is not new.

As Christians, Easter is exceptionally important to our faith. On Good Friday we acknowledge the day Our Lord and Saviour, Jesus Christ, dying through unimaginable torture on the cross gave His life for our salvation. Meanwhile, His succeeded apostles, the hierarchy, led by the successor to St Peter, Pope Francis, have denied Him far more than 3 times and with no requirement for a cock crowing. What’s more, in the chaos that marks the age we are living in, a remarkable uncertain time when people desire accompaniment with Christ, how have the leaders behaved? They have abandoned the flock to the wolves when they were most needed. A few decent clerics remain, a saintly few and with them a collection of tenacious recusants to bequeath the faith to the next generation in the hope to continue, certa bonum certamen, to fight the good fight.