The black police chief of Portland has spoken out on the now 10 weeks of violent rioting, looting and communist agitation in the name of Black Lives Matter.

Portland's police chief called out a small band of agitators who have started violent offshoots of the largely-peaceful Black Lives Matter protests, saying they have "taken away from" the movement.

Speaking at a Wednesday morning press conference, Portland Police Chief Chuck Lovell, who is Black, said that the violence "is not forwarding the goals that are going to lead to better outcomes for people of color."

Wednesday marked the 70th consecutive day of protests in the city, which began after the police killing of George Floyd, a Black man in Minneapolis, in late May. 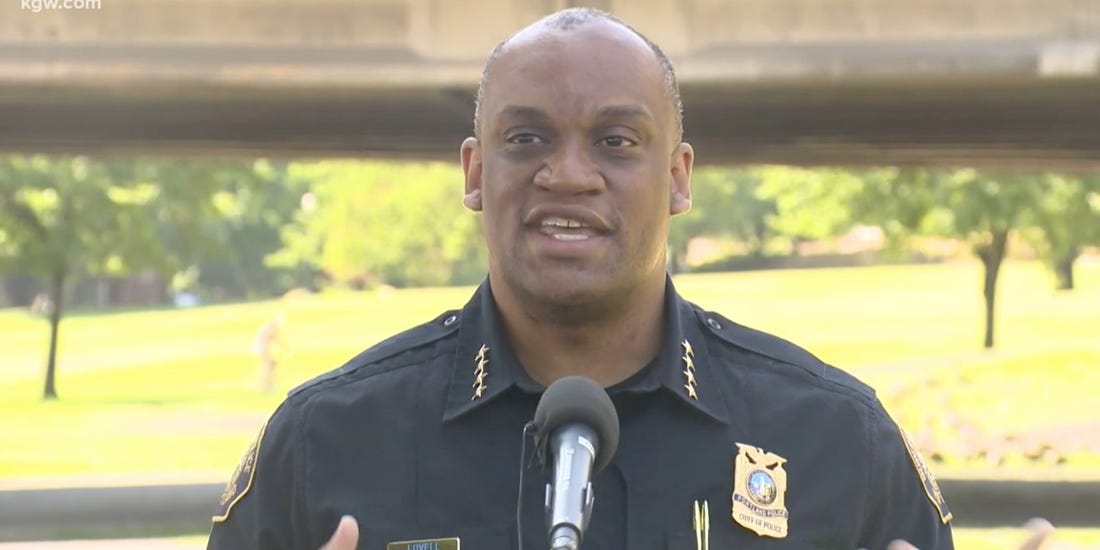 Portland's protests have been held in the downtown area, near the police headquarters and a federal courthouse. They were largely peaceful until early July, when President Donald Trump sent federal agents to the city to quell the unrest.

Oregon Gov. Kate Brown cut a deal with the White House last week to start scaling back the federal presence in Portland, and demonstrations have since become more peaceful again.

However, in recent nights, smaller groups have broken off and held separate demonstrations outside police precincts and union buildings in other parts of Portland, and it's these protests that have turned violent.

The Portland police declared riots at these demonstrations on Tuesday and Wednesday night.

On Tuesday night, one group broke into the Portland Police Association's Office in North Portland and set fires, according to The Oregonian. Officers had rocks and bricks thrown at them and three people were detained, according to KGW.

"If you're trying to burn, burglarize buildings or throw Molotov cocktails, rocks or other things that injure officers ... to me, there's no message there," Lovell had told the press conference hours later on Wednesday morning, according to The Oregonian.

That night, a couple hundred people gathered outside the Southwest Portland police precinct, with one person trying to break a window, and another starting a fire in a trash can next to the entrance, The Oregonian reported.

Police responded to that riot with stun grenades, and detained at least four people.

At his Wednesday morning press conference, Lovell said it has been difficult to continue redirecting officers to man protests at a time when the city is seeing an increase in gun violence.

According to the police, there were 99 shootings in July, 35 more than last year.

Lovell said he was speaking out to inspire Portland to come together on this issue, saying the violence won't end until the city takes a united stand against it.

"Portlanders need to send a strong message that enough is enough," Lovell said.

Lovell also wrote an op-ed in The New York Times on Monday, where he differentiated the mostly-peaceful protests from the subset of agitators causing the bulk of violence.

"As police officers, our duty is to uphold the rights of anyone to assemble peacefully and engage in free speech," he wrote. "But over the months of protests, a concerning dynamic developed. People protested peacefully, while others engaged in dangerous activities that could have resulted in injury and even death."

"As a Black man and a public servant, I have a unique perspective. I agree with a local pastor, E.D. Mondainé, who stated these 'spectacles' are drowning out the voices that need to be heard to make positive change. This violence is doing nothing to further the Black Lives Matter movement."