BLM are far-left communist extremists, they are Anti Family, Anti Christian and Anti White. We need to speak the truth about these Marxists.

On Saturday, hundreds of Black Lives Matter activists took to the streets of Brixton, joining forces with the far-left climate alarmist group Extinction Rebellion to attempt to shut down the roads, and demand reparations on the anniversary of the Slavery Abolition Act.

“This is what the BLM movement wanted from the start and it will divide our society like never before,” Mr Farage said.

The Brexit leader went on to question why the Metropolitan Police Service (MPS) allowed the demonstrators to march in public while wearing uniforms.

“The Public Order Act 1936 prohibits by law paramilitary and political uniforms. Why is the Met Police allowing this to happen?” he asked.

The Public Order Act of 1936 was passed to curb the spread of Sir Oswald Mosley’s British Union of Fascists (BUF), who were also known as the Blackshirts in reference to the uniforms they wore.

Section one of the act states: “Any person who in any public place or at any public meeting wears uniform signifying his association with any political organisation or with the promotion of any political object shall be guilty of an offence.”` 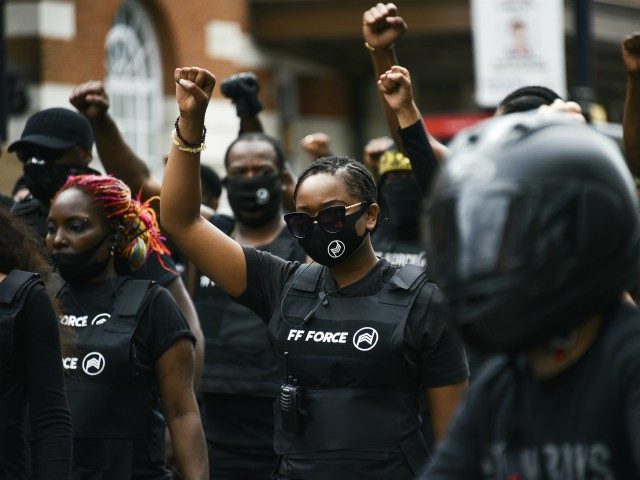 The act was used extensively against the supporters of the terrorist Irish Republican Army (IRA) during the 1970s, and in recent years against the Christian nationalist group Britain First, with police arresting leaders Paul Golding and Jayda Fransen for taking a “Christian patrol” through the streets of Luton in 2016 while wearing Britain First lapel badges.

The two were banned from entering Luton and were forced to present themselves at a police station every week during while they were free on bail.

The Met said in a statement that three people were arrested during the BLM protest, with one man charged with affray, another for assaulting an emergency worker, and a woman was arrested for racially aggravated assault. However, there were no arrests made under the Public Order Act of 1936.

Deputy Assistant Commissioner Laurence Taylor, who was in charge of policing the demonstration, said: “The gatherings today have been largely peaceful and we thank our communities for working with us to ensure the voices of the community could be heard safely and done so responsibly to ensure the safety of all”.

Uniforms or no, all such demonstrations are in fact illegal under the anti-coronavirus regulations, but the authorities have consistently refused to enforce the law against them for fear of “serious disorder”.

Nevertheless, the co-leader of the far-left Green Party, Jonathan Bartley, accused Mr Farage of “trying to create division,” adding that: “these people in Brixton today know that love and justice will conquer the fear and hate that you peddle. Hope is what people need right now and they are showing the pathway toward it.”

However, London Assembly Member David Kurten insisted that “London cannot have paramilitary groups parading down the streets and threatening disorder. This group should be banned under the 1936 Public Order Act by the Mayor of London.”