THE DIVINE REMEDY FOR COMMUNISM, By a Carmelite Nun of the Holy Face. O.Carm.

Today when we speak about communism, we no longer need to imagine what it was like for the ordinary Russian folk under the soviet dictatorship. Neither do we have to picture to ourselves the fate of the poor Chinese or North Korean people. We are beginning to experience it for ourselves. The State no longer permits ‘freedom of speech’ when we attempt to make the truth known. It denies us ‘freedom of conscience’ if we try to do anything contrary to what the media tells us is for our own good. Russia has spread her errors throughout the world as Our Lady of Fatima foretold. 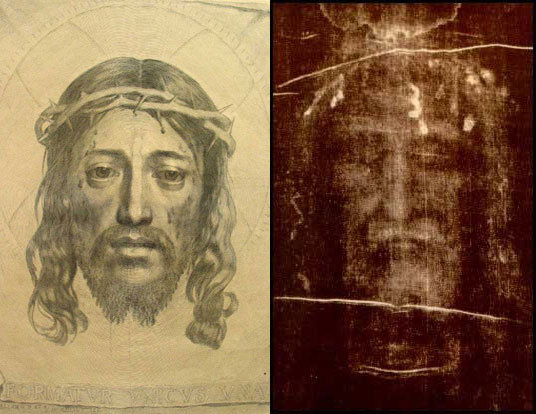 Both Communism and its remedy, Devotion to the Holy Face of Jesus, were revealed to the world in the 1840’s. Yet they did not begin from that date. Both of them can trace their origins back to the fall of our first parents, Adam & Eve. Communism is only another form of the battle between good and evil, grace and sin, the children of God and the children of darkness. Devotion to the Holy Face likewise has its foundations in the beginning of the history of the human race.

After Adam & Eve had sinned, they heard the voice of God as He walked in the garden of Paradise (Cf. Gen. 3:8) but they were afraid, and hid from the Face of God. Had they remained in the state of grace, they would have been delighted to behold Him, and gladly have gone to meet Him. After being cast out of Paradise, Adam & Eve repented and longed to be able to behold the Face of God and to regain what they had lost. Because they had been created in the image and likeness of God, the longing to look again upon the Beatific Face of the Triune God left them forever restless. St. Augustine of Hippo summarises it in his famous words “Thou hast made us for Thyself,1 O Lord, and our heart is restless until it finds its rest in Thee.”2 This thirst, this longing in the human heart was inherited by all the descendants of Adam and Eve, and it was given expression by the just men of the Old Testament. Some notable examples are Moses and King David.

In Exodus Chapter 33, Moses was permitted to experience a tiny foretaste of the Beatific Vision. Nevertheless, it did not satisfy him, for he continued to plead with God, “Show me Thy Face.” God said to him, “No man can see Me and live.” Only in Heaven shall we fully satisfy our longing to regain what Adam and Eve lost. King David also, in the Psalms which he composed, frequently makes mention of seeking the Face of God. 3

Only when the fullness of time had come and Jesus was born in Bethlehem were men able to behold in human form the Face of God, which previously they had worshipped by Faith. The Holy Face of Jesus was adored by Mary and Joseph first of all; then by the shepherds and the magi, and later on by His Apostles and disciples. 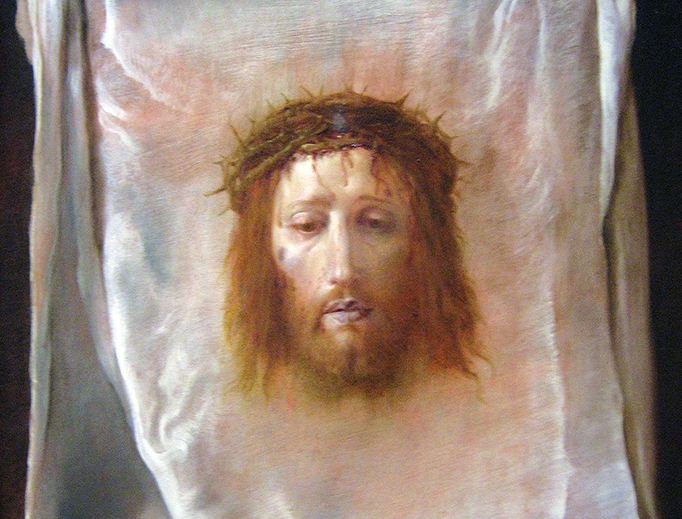 In the Old Testament, it was forbidden to make graven images. Under the New Law, that prohibition was abolished. Our Saviour Himself left us two images (Icons), of His Holy Face: the veil of Veronica and the Holy Shroud. It is important to note that both of these portray the suffering Face of Christ, for He continues to suffer in all members, but especially today in the Head of the Mystical Body; that is to say, in the clergy or hierarchy of the Catholic Church which is passing through Her own Passion. This, however, is a subject in itself.....

Images of the Holy Face were venerated by the faithful from the very time of the apostles, who spread this devotion. St Paul refers to it in his Epistles; St. John speaks of it in the Apocalypse; but perhaps St. Jude best deserves the title of the first Apostle of the Holy Face. Because of his name, he was often mistaken for the traitor Judas, which caused him much sorrow. To prevent this and to show his love for Our Lord, he carried an image of the Holy Face with him wherever he went (just as we wear the medal of the Holy Face today). Tradition also states that it was St. Jude who was entrusted with the care of the Holy Shroud.

Many iconographers and painters throughout the centuries portrayed the Face of Christ, but it was not until the 1840s that the importance of this Devotion and its inseparable link with the work of Reparation was revealed to Sr. Mary of St Peter, a holy Carmelite nun in Tours, France. Our Lord told her that Devotion to His Holy Face was a powerful remedy for Communism as well as a means of consoling Him for the sins committed against the first three Commandments; namely atheism (in all its forms), blasphemy and the profanation of Sunday and Holy days of obligation. He desired furthermore that the holy Cross and all the other instruments of His Passion should be used by Christians as powerful weapons to put division in the camp of our enemies. The Chaplet of the Holy Face composed by Sr. Mary of St. Peter is a militant prayer which makes use of these powerful weapons. 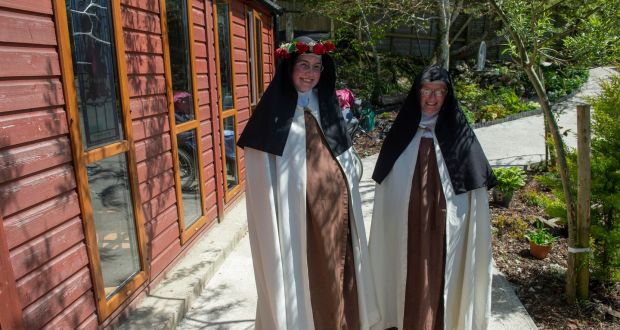 Mother Maria Pierina, a holy nun in Italy, also received additional revelations concerning the Devotion of the Holy Face during the 1930s, which again emphasise its importance in the spiritual warfare in which we are engaged. In 1938 Our Lady appeared to her, holding a scapular with the Holy Face of Jesus on one side and the Sacred Host on the other. She asked Mother Maria Pierina to have them made and distributed, promising that this scapular would be “a weapon for defence, shield for courage, a token of love and mercy....Diabolical nets are spread to wrench the Faith from hearts; evils abound, true apostles are few, and the remedy is the Holy Face of Jesus.”(May 1938)

This medal of the Holy Face is very symbolic. It is round and usually gold in colour, reminding us of the shields which were used in biblical times. When highly polished, they could be used (in the right conditions) to reflect the light of the sun and blind the enemy, making him easy to overcome. It is similar in our spiritual warfare. St. Paul tells us that Faith must be our shield4 and in another place he prays that we might have Christ dwelling in our hearts by Faith.5 We were all made in the image and likeness of God.6 This image was somehow obscured by original sin and afterwards by actual sin. By Faith, Hope and Charity we Christians must labour to restore the image of God in our souls, to regain purity of heart, and thus to become highly polished shields of gold, reflecting Christ’s Image and the light of His Countenance to those around us. This will not only console Him, but it will put the devil and the children of darkness to flight, for they cannot stand the Light. 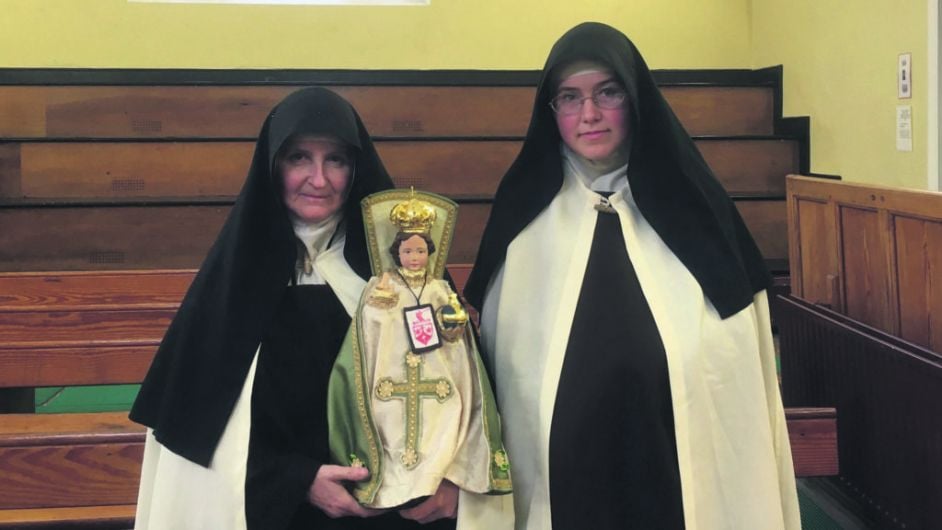 Even though we may not experience any sensible devotion in honouring the Holy Face of Jesus, and even though Its beauty is concealed from our eyes at present, that is not important. “We walk by Faith and not by sight.”7 It is a devotion of Faith which consoles our suffering Saviour greatly and it is the remedy He has given us for counteracting the effects of Communism. It is particularly fitting that this should be the remedy for a number of reasons.

The whole world today is shrouded in the darkness of sin and apostasy. In a prophetic vision, St. Patrick saw the light of Faith extinguished in Ireland where he had laboured so hard to preach the Gospel. As he wept, an angel of God bade him to look and he beheld a light arising in the North; a flame which spread until the whole of the Island of Ireland was ablaze with light.

In the Book of Machabees we read: “Now when the sun shone upon the shields of gold and of brass, the mountains glittered therewith; and they shone like lamps of fire.”8 May we each polish our shields of gold, have Christ dwelling by Faith in our hearts, and take up the weapon we have been given to secure the defeat of Communism. Then at the time appointed by God for the great sign to appear in the heavens; “a woman clothed with the sun and the moon under her feet and on her head a crown of twelve stars,”9- in other words, at the hour of Our Lady’s triumph we shall each reflect that light, play our part in rekindling the fire of Faith and we shall see the enemies of God, the children of darkness, flee before His Face!

So let us pray in the words of the Psalmist: “Arise, O Lord, into thy resting place: thou and the ark which thou hast sanctified.” 10 “Let God arise, and let His enemies be scattered: and let them that hate Him flee from before His Face.”11

1� The fact that God has made us for Himself is the fundamental objective fact. Baltimore Catechism No. 1, Q. 6. Why did God make you? A. God made me to know Him, to love Him, and to serve Him in this world, and to be happy with Him for ever in heaven.

6� Baltimore Catechism 1. Q.3. What is man? A. Man is a creature composed of body and soul, and made to the image and likeness of God.