The Far-left and Communist Republicans bused men down from the North to attack Irish Patriots in Dublin. Only two arrests were made.

Two people were arrested following clashes between counter demonstrators and the National Party who were holding a rally outside Leinster House to protest at Covid-19 restrictions.

Gardaí have said they are investigating organisers of both protests for possible breaches of health regulations.

The rally by the National Party was being held under the 'Let Ireland Live' banner and was planning for 1pm outside Leinster House.

But around 100 counter-demonstrators arrived down Molesworth Street and attempted to break through crowd control barriers which had been erected on Kildare Street. 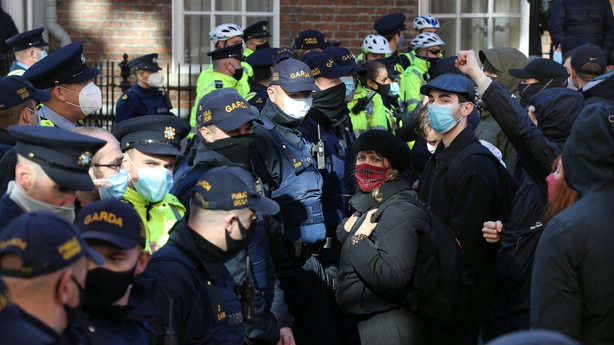 Gardaí intervened to keep the two groups apart and forced the counter demonstrators, who included a number of left-wing organisations, back up Molesworth Street.

The far right National Party, which is headed by Justin Barrett, then held a rally of about 150 people outside the gates of Leinster House.

Mr Barrett said the country is being held in lockdown because of an exaggerated death rate from Covid-19.

The National Party dispersed around 3pm while the counter-demonstrators continued to hold a number of protests while a Garda operation continued.

Far left group Anti-Fascist Action (AFA) Ireland said it organised the counter demonstration. In a statement the group described itself as "militant".

"We believe in physically and ideologically confronting fascism," said the statement.

Gardaí included members from the North Central and South Central divisions as well as the Public Order Unit, the dog unit and the Mounted Support Unit. Another man was arrested for another public order offence in Henry Street.

A Garda spokesperson said there is an investigation into the organising of the protests.

Under Covid-19 regulations, it is an offence to organise an outdoor gathering of more than 15 people with offenders liable to fines of up to €2,500 and six months imprisonment.