Copy of 1916 proclamation of the Irish Republic is sold for €190,000 to private collector.

James Connolly supervised the secret printing of the Proclamation of the Irish Republic in Liberty Hall and intended printing over 1,000 - but as there wasn't enough metal type to print it in one run, only about 500 were made.

Fewer than 50 have survived – most of which are in museums and institutions with only 20 or so in private hands.

The historic decree was published by the Irish Volunteers and the Irish Citizen Army acting as "The Provisional Government of the Republic of Ireland" on Monday 24 April 1916.

Auctioneers Whyte's described it in the sales brochure as "the document that launched an uprising that changed Ireland forever. Comparable to the Declaration of the United States of America, it is an historic relic of immense interest". 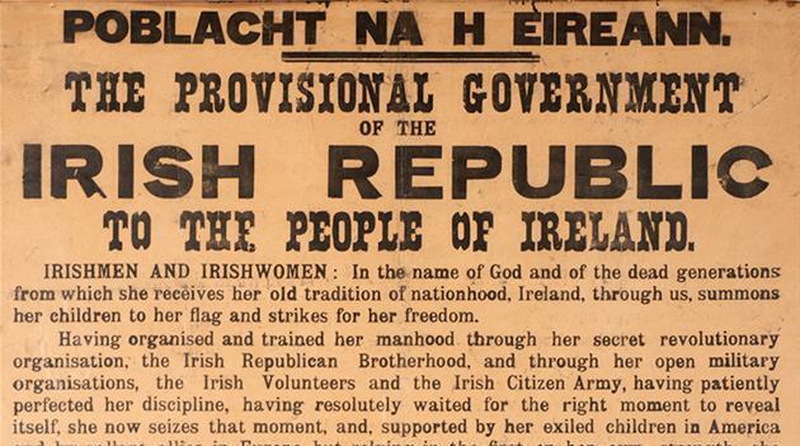 The copy has an inscription in pencil at lower left: 'This Proclamation …. I took off "Marks" Jewellers shop Henry Street (opposite General Post Office) on Tuesday evening April 25th 1916, [signed] J. Brady’.

Whyte's said this inscription is important as "it gives a contemporaneous provenance to the document".

A spokesperson for Whyte's told RTÉ: "We had a lot of interest with four bidders, including on the phone and in the room.

"It was an exceptional piece because of the inscription, which made it unique. We were optimistic of the higher estimate but are very pleased with the result.