What you do in your own home is now the state's business! The totalitarian lockdown continues with letters being sent to houses found to be in breach of the extreme and draconian restrictions.

RESIDENTS AT OLIVER Bond Street were  contacted by Dublin City Council about breaches in Covid-19 guidelines four days before a party took place outside the complex, TheJournal.ie has learned.

Gardaí are trying to identify the organiser of a party that took place outside a flat complex in Dublin’s south inner city over the weekend.

Gardaí responded to reports of a large gathering at the complex on Oliver Bond Street on Saturday night. Around 100 people were in attendance and footage of the party was widely shared online.

A number of patrols were conducted in the area and by approximately 11pm gardaí requested all people to disperse, and officers maintained a presence in the area.

Footage circulating of the event shows a large group of people gathered outside the complex with a marquee in place. 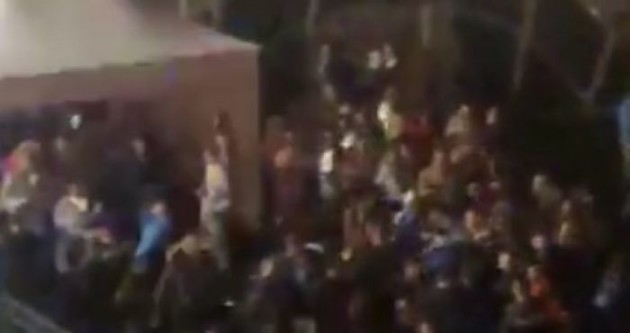 In a letter sent to residents at the complex last Wednesday, the council said a recent increase in Covid-19 cases was likely to result in further visitor restrictions for the capital and expressed concerns over a “number of breaches” of government guidelines at the complex in recent weeks.

“Unfortunately, I must remind residents that no temporary structure such as marquees or bouncy castles are to be erected within the public areas of Oliver Bond House, the football pitch or its grass areas without the written consent of Dublin City Council,” a council official wrote.

“Regrettably there has been a number of such breaches of government guidelines resulting in numerous complaints in regards to late night noise and partying within the complex. These complaints are considered serious breaches of tenancy and will be dealt with as such,” they said.

In a statement issued today, a spokesperson for An Garda Síochána said they are not investigating breaches of public health regulations by those in attendance at Saturday’s party, noting: “Social distancing, wearing of masks in public areas and other such guidelines are not penal regulations.”

However, they noted that under an amendment to the Health Act which came into effect on Saturday, 19 September, people are not allowed to organise an event in breach of the Covid-19 guidelines.

Dublin is current under Level 3 of restrictions, meaning no outdoor gatherings of more than 15 people are permitted.

Gardaí have today confirmed they are “carrying out an investigation to identify the organiser(s) of this event”, and also investigating “any other breaches of criminal legislation which may have occurred”.

“In supporting the Covid-19 public health guidelines and regulations, An Garda Síochána has and will continue to adopt a graduated policing response based on its tradition of policing by consent. This has seen gardaí engage, educate, encourage and, as a last resort, enforce,” the statement added.

A garda spokesperson last night said “no breaches of regulations were detected” at the gathering on Saturday, but gardaí released the updated statement this morning.

Speaking on The Pat Kenny Show on Newstalk, Taoiseach Micheál Martin said the guards’ approach “all along, operationally, has been to encourage compliance, work with people, enage with people, enforcement is a last resort”.

Martin described the type of gathering seen on Saturday night as “a serious issue” in terms of the spread of Covid-19.