Residents of a direct plantation centre in Cahersiveen have begun a hunger strike to protest conditions at the hotel on the centenary year of the 1920 IRA Hunger Strike.

A NUMBER OF asylum seekers living in a Direct Provision centre in Caherciveen, Co Kerry have gone on hunger strike.

The group, who are accommodated at the former Skellig Star Hotel, say they have been “traumatised” from living in the centre and are seeking to be moved out immediately.

Earlier this year, there were 22 confirmed cases of Covid-19 at the centre, which was opened by the Department of Justice & Equality on 18 March as part of its response to the pandemic.

Residents who tested positive were moved off-site to an isolation facility.

Migrant rights groups and asylum seekers living there have repeatedly called for the centre to be closed.

A spokesperson for the residents confirmed to TheJournal.ie this morning that a number of adults still living in the centre had started a hunger strike, repeating their demand to be moved out of the accommodation. 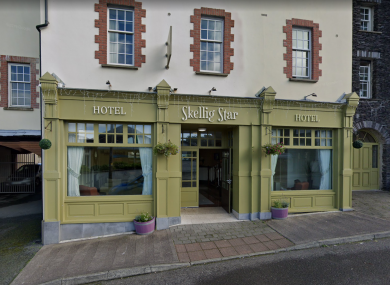 “We have been traumatised, and for us to recover from this we need to be all moved out of this accommodation immediately by Ministers [Roderic] O’Gorman and [Helen] McEntee to appropriate accommodation centres,” a statement said.

The group is also seeking access to a social worker, and a transfer to accommodation with “adequate facilities” where they can have a vulnerability assessment and get treatment.

In May, questions were raised over whether or not the Department of Justice – which was then in charge of Direct Provision – knew about a confirmed Covid-19 case in an individual there before asylum seekers were moved from Dublin to Kerry.

Department officials have maintained they were only informed of the case only when they received a letter from TD Catherine Murphy.

A spokesperson for the Department of Children and Youth Affairs has been contacted for comment.