BLM has joined forces with "End SARS" to protest "systemically racist policing" in the US and Nigeria, it may come as a surprise to some but Nigeria's police force treat their African population with far more brutality than their American counterparts. Must be systemic racism to blame.

Peaceful demonstrations and riots in response to police violence and calls for reform and abolition as millions attempt to reconcile generations of injustice have been common scenes in America since the killing of George Floyd by former Minneapolis Police officer Derek Chauvin in May.

Black Americans have been advocating for equality and others have been standing in solidarity with them.

But, it wasn’t until about four weeks ago that this act of solidarity was truly reciprocated. When protests demanding the abolition of Nigeria’s Special Anti Robbery Squad (SARS) reached record participation last month, African American Black Lives Matter protesters began demonstrating in support. 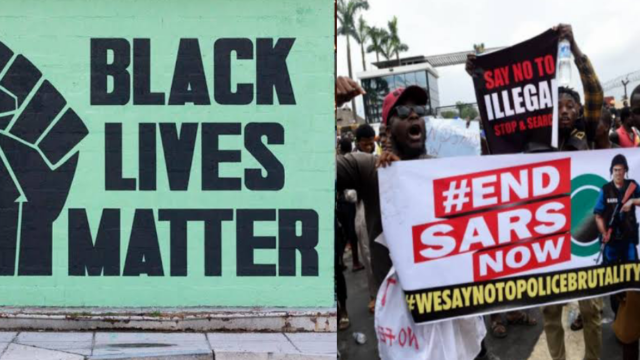 Nigerians say SARS has become an agent of corruption and regularly abuses its power. These allegations are similar to those made against law enforcement in the United States.

Organizers who had spent months gathering donations for bail funds for protesters in American cities began sending money to protesters in Nigeria.

Nigeria gained its independence in 1960, after fighting British exploitation and colonial rule for more than a century. Five years later, the Voting Rights Act was passed in the midst of America's civil rights movement, granting millions of African Americans the right to participate in the nation’s Democracy. Since, both groups have endured persistent racism and neo-colonialism born out of the Atlantic Slave Trade.

“Older generations have tried so much that they accept the cultural norm,” said 28-year-old Walter Ford, one-third of the San Diego-based Activated Podcast.

“We’ve learned,” he said. “We refuse to allow things to continue to go in a bad direction.”

Pan Africanism – a movement to unite Black people around the world in a singular fight for global equality – began in the early 1900s, but this is one of the first times masses of protesters in different countries have assisted one another at the grassroots level.

“Previous generations, there wasn’t a GoFundMe or way to get my money or my resources to (people) without going through a third party that’s manual or confined by land, air or sea,” Ford explained.

Pew Research reports indicate 41% of protesters in the US this year have been younger than 30 and that up to 48% of Black social media users are likely to have posted something in support of a social justice cause recently.

The influence of social media has been a significant factor in Nigeria, where protesters do not appear to be responding to a singular tipping point like George Floyd in America but are emboldened by their peers in the African diaspora.

“By sharing and posting on social media (we are) one voice,” said 24-year-old Chima Uwakwe, who has been participating in demonstrations in Port Harcourt, the capital city of Nigeria’s River State. The louder we can get the better the world can hear us.”

American protesters oppose racial discrimination in policing. In Nigeria, citizens and police forces are both majority Black, but activists there say they are also living the consequences of centuries-old racist institutions created and maintained by the British government and European imperialism.

“It’s as if Black people are oppressed by the police systems everywhere,” said Joy Monene, a 24-year-old Nigerian-British media personality. “Yes, I do see similarities. We are all Black people fighting for our basic human rights so it’s really and truly the same cause.”

Millions of Black Americans can trace their background to an ethnic group from areas that became present-day Nigeria after the slave trade. Separated from their ancestral homelands by the British Empire for centuries, the events of 2020 have – in a sense – re-united the two groups.

“I’ve only been to Nigeria once,” said Nenechi Nnachi, a 21-year-old SDSU senior born to Nigerian immigrant parents. “Some days I felt removed from my history, but now with what’s going on I feel like that (connection) has grown.”

Nnachi, a member of SDSU’s Afrikan Student Union, encourages her peers to keep the Black Lives Matter and Anti-SARS movements top of mind.

“Keep on having those discussions,” she said. “For students who have a Black Student Union or African Student Union at their school, take some time to have a meeting about this.”