Aaron “Jay” Danielson, the man fatally shot Saturday in downtown Portland after a pro-Trump rally, was remembered Monday by his business partner as “a proud American and a proud Portlander.”

“We were like brothers. We were inseparable,” Luke Carrillo said as a group of Danielson’s friends gathered at Portland’s Washington Park to talk about him.

“Jay touched many lives. He was quick-witted and funny as could be,” said Carrillo, who ran a specialty moving company in Portland with Danielson. The two also were roommates.

Another friend, Christine Banks, 35, of Portland, described Danielson as a peaceful man who “would not have hurt anyone.” He loved his family, friends, nature and animals, she said. He was raised in Spokane, Washington, and had lived in Portland for many years. He had never married and had no children.

Danielson, 39, had attended a car caravan in support of President Donald Trump on Saturday afternoon and was shot about 9 p.m. after most of the caravan had left downtown Portland. Witnesses described hearing shouting between some men, seeing or feeling a stinging spray in the air and then the sound of two shots.

Widely shared photos of Danielson after he was shot showed him wearing a Patriot Prayer ballcap. The right-wing group’s leader, Joey Gibson, called him a “friend and supporter.”

Patriot Prayer has been at the center of multiple Portland demonstrations in the past that have often ended in violent clashes with anti-fascist opponents. Saturday’s car rally began in Clackamas, where tensions arose almost immediately. Scuffles also broke out as the caravan moved from near the Clackamas Town Center mall to Portland. 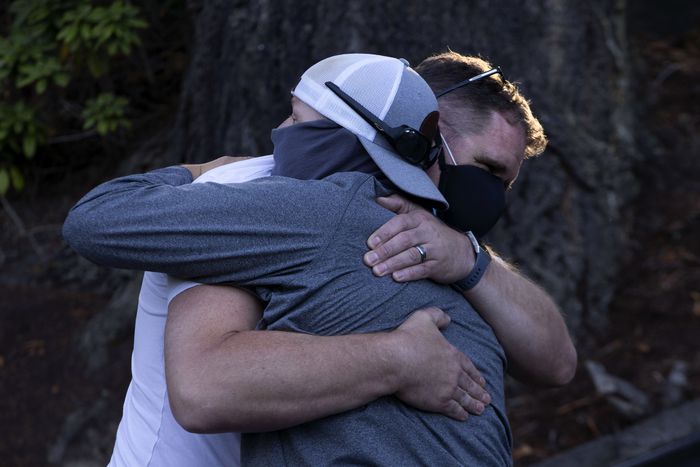 Banks said she didn’t know anything about the circumstances of Danielson’s death.

“He had friends of every color,” she said. “It didn’t matter who you were or what you believed in.”

Michael Hamilton, one of Danielson’s friends, said he wanted to give “everyone in this community, in this state and in this torn country an opportunity to know the good and decent man that was lost on these beautiful city streets.”

“It’s time this city knew who he was,” he said. “He was a good, good man. He would help anyone at any time.”

Hamilton and others who knew Danielson did not discuss what led to his death.

Earlier Monday, the Multnomah County Medical Examiner’s Office said Danielson died from a single gunshot wound to the chest. The manner of death was homicide, the medical examiner said.

Law enforcement sources said Michael Forest Reinoehl, 48, is under investigation in connection with Danielson’s killing, which unfolded on Southwest Third Avenue. Danielson died in the street. Police have made no arrests.

A witness and livestreamer, Justin Dunlap, said he was walking south on the east side of Third and about to cross the Alder Street intersection when he heard shouting. He said he saw a man later identified a Danielson “pull something up from his hip with his right hand and a big cloud of mace goes in the air.”

Dunlap said a half second later, “there were two pops” of gunfire and Danielson collapsed.

Reinoehl, who has had recent addresses in Northeast Portland, Gresham and Clackamas, calls himself an anti-fascist and has posted videos and photos of demonstrations he attended since late June, accompanied by the hashtags #blacklivesmatter, #anewnation and #breonnataylor.

Portland protests have continued for more than three months since George Floyd, a Black man, died in Minneapolis in May under the knee of a white police officer.

The protests initially brought thousands of people to downtown in support the Black Lives Matter movement but the nightly crowds have dwindled to a few hundred people in a splinter group who often target Portland police and police buildings with fire and projectiles, drawing riot declarations and much-criticized crowd-control tactics that include tear gas and impact munitions.

More recently, pro-police demonstrators and backers of President Trump have held their own rallies.

Other friends of Danielson’s gathered at the park said he was a big-hearted man who loved Portland. They said they’re devastated by his death.

“The world lost a great guy,” one said.