Fines and Garda checkpoints are being rolled out nationwide as we move into Level 3 of the Fake COVID19 lockdown. Are you ready for the new draconian measures?

A range of restrictions are in effect after the entire country was moved to Level 3 of the plan for Living with Covid-19.

The measures came into force at midnight as part of the efforts to curtail the recent rise in cases of the coronavirus.

Thousands of gardaí are manning hundreds of checkpoints as part of Operation Fanacht, which was set up to police the Level 3 restrictions, with long delays reported on many busy routes around the country.

Checkpoints have been set up in the regions and on all the main arterial routes around Dublin to encourage people to remain in their own counties and to only make essential journeys.

Those on educational and essential journeys are entitled to travel, but with traffic levels having risen last week to 80% of the pre-Covid levels, Operation Fanacht is now under way to reduce the numbers on the roads.

Gardaí have set up 132 checkpoints across the country and they will remain for the duration of the policing operation, which also includes high visibility and mobile patrols. 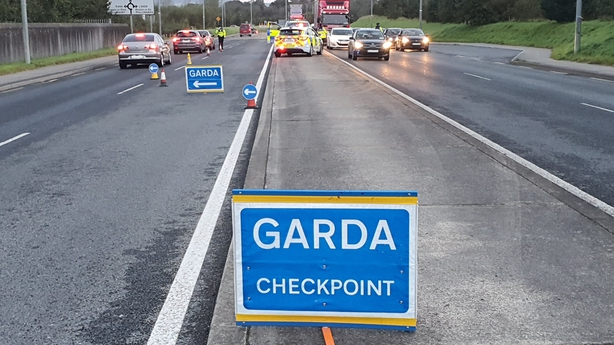 Static checkpoints are in place on the outskirts of Dublin at Balbriggan, Finglas, Blackchurch and the Blessington Road.

Even though they do not have the legal power to stop people breaking the Level 3 restrictions, traffic will be delayed as gardaí question motorists and assess whose journey is essential and who is to be asked to turn back.

However, Garda Commissioner Drew Harris has insisted their approach will remain community-based.

Along with engaging, encouraging and explaining the public health restrictions, Mr Harris said that thousands of gardaí are also available to offer support, reassurance and assistance to the elderly, the vulnerable, those living alone or anyone who needs help.

Retired Assistant Garda Commissioner Pat Leahy said the checkpoints are intended as a deterrent and to let the public know that "something has changed" as Level 3 restrictions take hold.

Speaking on RTÉ's Today with Claire Byrne, Mr Leahy said a budget for overtime has been put in place, so these checkpoints should not impact on normal policing.

Fine system for Covid-19 breaches may be considered - Varadkar

The Tánaiste has said a system of fines may have to be considered for people who break restrictions imposed due to Covid-19.

Leo Varadkar told a meeting of Fine Gael TDs, Senators and MEPs last night that the Government's primary aim was to secure public buy-in rather than to introduce draconian measures.

However, Mr Varadkar said if fines were to be introduced, they would have to be both graduated and imposed on-the-spot fines rather than involving the courts. 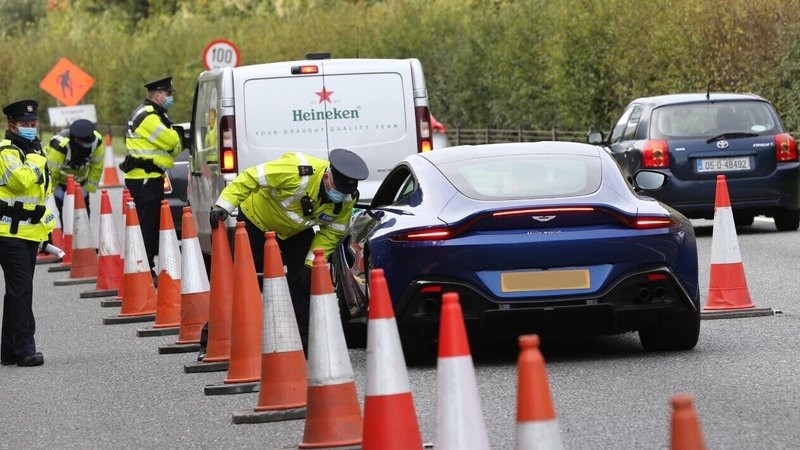 He suggested an appropriate penalty could be in the order of €50 for not wearing a mask, and €200 for not abiding by travel restrictions.

Mr Varadkar also told the meeting that he was not in favour of giving additional powers to gardaí to enter people's homes over Covid-19 breaches.

He added that the issue of fines had been considered before, but gardaí was were opposed to it.

A Government spokesman said this morning: "The law already provides for fines of €2,500 for breach of some laws like organising a gathering or not wearing a mask on public transport.

"All options are under review but there are no plans at present for a new system of fines."

The Level 3 restrictions will remain in place until midnight on 27 October, at which point the situation will be reviewed by the Government, based on public health advice.

The Bishop of Cloyne has said it is "with regret" that arrangements in line with Level 3 restrictions must come into force considering the "outstanding efforts of parishioners and priests" in preparing churches for the return of public masses in recent months.

Bishop Larry Duffy also noted the "great work done" by the many volunteers who have been keeping churches clean.

However, he said people must once more "rely on online means" to celebrate the Eucharist.

Chief Medical Officer Dr Tony Holohan said a broad societal effort over the coming weeks is now essential and everybody has the power to interrupt the spread of Covid-19.

Minister for Health Stephen Donnelly said while the move to Level 3 will be a deeply difficult thing for people to do, if the measures are fully embraced the virus can be suppressed and pushed back.

Yesterday, the Department of Health was notified of 432 new cases and one additional death.