KBC Bank claims to have to sold the property to Beltany, a Goldman Sachs owned vulture fund, but Beltany claims to not be in possession of the property. If that sounds suspicious it's probably because it is.

The majority of tenants who were evicted from a property they were renting in Phibsborough, north Dublin returned to the home on Thursday.

Nine tenants, many of whom are foreign nationals, were removed from the Berkeley Road property on Wednesday morning.

Several men wearing all black, face coverings, caps and sunglasses entered the house on Wednesday morning, instructed the tenants inside to leave and then boarded up the front door and windows.

A number of gardaí attended the eviction and watched from the street outside the front door, as one of the tenants was physically removed from the property, according to video footage.

The tenants spent several hours afterwards outside the house, with their belongings and bin bags full of clothes on the pavement.

On Thursday, activists with the Dublin Central Housing Action group removed the boarding and allowed the tenants to re-enter the property. The housing group was previously involved in several high-profile occupations of vacant Dublin city properties in 2018, to protest the housing crisis.

The tenants claim they had not been served written eviction notices to vacate the property prior to it being repossessed on Wednesday. Six of the tenants were back inside the property on Thursday.

Upon re-entering the home tenants said significant damage had been caused inside the property, including windows, doors and toilets being broken, with bed mattresses in the house also removed.

Gerry Ward, who had earlier been the tenant’s landlord, said he had been involved with the property since around 2004. He said there was a legal dispute over it since 2017 with a property fund, Beltany Property Finance. 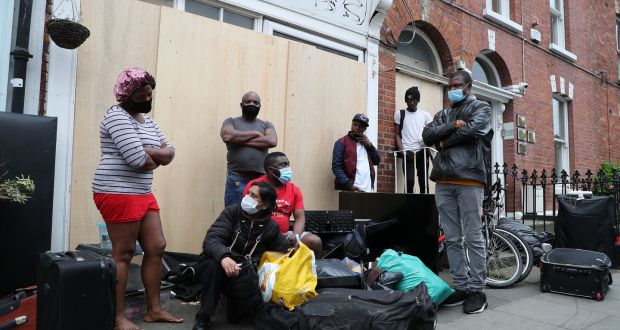 A spokesman for Goldman Sachs, which controls Beltany, said the fund had sold the property on June 2nd, but was unable to disclose the name of the buyer citing confidentiality reasons.

One source said the property had been sold to a Dublin-based company. Two individuals listed as directors of that company did not return requests for comment on Thursday.

KBC Bank had owned the loan on the property previously, but sold it to Beltany around two years ago, a KBC spokeswoman said.

A number of the housing activists assisted tenants in cleaning the property, as well as supplying new mattresses, installing a new toilet and replacing the front door on Thursday.

Elias Niyi Adbo Jegede (47) is one of the tenants, who came to Ireland from Nigeria in 2005, and had been living in the home for several years.

“What happened here is someone that has lived here for several years was evicted within 10 minutes . . . I don’t see how this is happening in Ireland,” he said.

Speaking after tenants re-occupied the home on Thursday he said: “I am very grateful for the Irish people who have helped us.”

The Irish Council for Civil Liberties (ICCL) has written to Garda Commissioner Drew Harris querying the presence of gardaí at the eviction. The civil rights organisation stated gardaí should not be playing any supportive role in property evictions, unless it was in response to criminal behaviour.

Another tenant, Theresa Chimamkpam (45), said she had been living in the house since 2011, and had not been served an eviction notice to vacate the home. “This is our home, in the middle of the pandemic you threw us on the road,” she said. Ms Chimamkpam said the property was in a “state of chaos” when the tenants returned on Thursday.

Emergency accommodation was sourced for a number of the tenants on Wednesday night by a voluntary group, Inner City Helping Homeless.

A Garda spokesman said legal representatives of the property’s owner attended Mountjoy Garda station on Wednesday, “to inform gardaí that they intended to secure their premises”.

Gardaí “noted the proposed activity but did not attend the premises at the time”, he said.

During the eviction a tenant made an emergency call to gardaí at 11am, and a number of units attended the scene, but “the majority were quickly stood down”, the spokesman said.

“Subsequently a number of Garda personnel remained at the scene with the primary function to prevent breaches of the peace and ensure the safety of all persons involved,” he said.