JUSTICE MINISTER CHARLIE Flanagan has greeted a number of Syrian families at the Mosney accommodation centre today following their arrival at Dublin Airport.

The families, made up of 50 people, have been resettled in Ireland under the Irish Refugee Protection Programme (IRPP).

The families had been living in a UNHCR refugee camp in Lebanon and were interviewed earlier this year by officials from the Department of Justice and Equality as part of a selection mission for the resettlement stand of the IRPP.

The families will initially reside in the Mosney accommodation centre where they will receive such supports, before being settled in communities across the country, according to the Department of Justice.

Pleased to welcome Syrian refugee families forced to flee their homes. Their stories are harrowing & deeply moving. Their long journey to find safety & sanctuary is now over. We offer welcome, friendship & support. 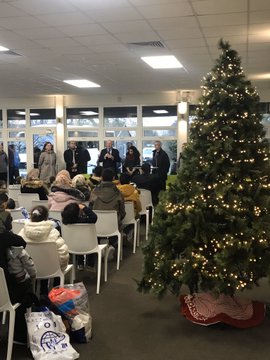 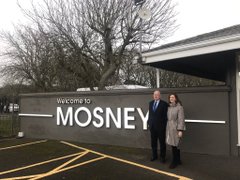 After welcoming the families on their arrival to Ireland, Minister Flanagan said: “I am delighted to have had the opportunity to meet with the families today.

Their experiences over the last year years as they were forced to flee their homes have been traumatic and their stories are harrowing and deeply moving.

“Their long journey to find safety and sanctuary is now over and I know that the people of Ireland will welcome them with open arms and the offer of friendship and support.”

On 17 December, Minister Flanagan and Minister of State David Stanton announced that Ireland will welcome up to 2,900 refugees between 2020 and 2023 through a combination of resettlement and community sponsorship in a second phase of the Irish Refugee Protection Programme (IRPP).

“The families that I have met and spoken with today are living proof of the transformative impact of refugee resettlement. They can now look to the future with hope for themselves and their children,” Minister Flanagan said.

“With over 700 million forcibly displaced persons globally and almost 7 million from Syria alone, it is only right and proper that Ireland plays its part and offers a helping hand to those less fortunate than ourselves,” he said.

“This new phase of the Irish Refugee Protection Programme will build on the work we have been doing since 2015 to resettle thousands of people.”