Sinn Féin Senator Lynn Boylan has landed herself in hot water – not least with some others on the left – after she “liked” a tweet that appears to advocate or condone violence against women who have been labelled  “Trans Exclusionary Radical Feminists” or TERFs by radical transgender activists.

A photo of the sticker, which was posted on a pole in Dublin, shows the words ‘Terf Cutter’ with an image of a bladed implement traditionally used to cut peat or turf. 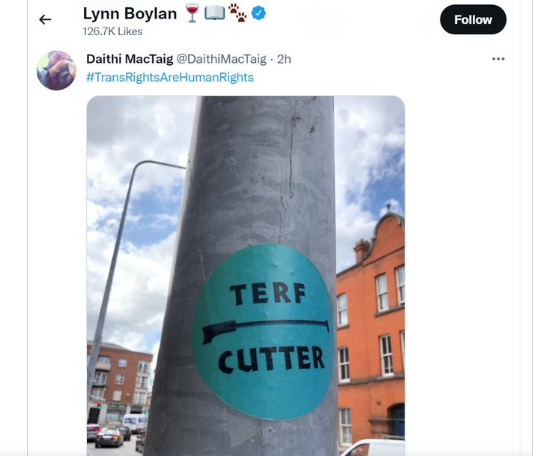 Iseult White, a women’s rights commentator, said the sticker was “inciting and glorifying violence against women.” She added that it made her “feel sick”.

TERFs, for those of you who do not follow this increasingly bizarre development, are feminists who have been thus labelled by transgender campaigners because they do not accept that biological men are women, or can simply choose to be women by their own choice.

Those who are usually described as TERFs resent the term and consider it a slur, preferring to instead be described as gender critical or just feminists. TERF is almost always described – by transgender activists and the media – as being a “right-wing ideology” which of course the TERFs also dislike.

Harry Potter author J.K Rowling is possibly the best known of the genre. Rowling, for questioning some of the absurdities of the extremists, was threatened with murder, rape and having her house bombed. So, threats against “TERFs” are not to be dismissed lightly. Not even if you are famous, wealthy and presumably somewhat protected against the lunatics out there having access to you.

Other “TERFs” have not been so fortunate. There are numerous examples of women being attacked by extremists including an assault on 61 year old Maria MacLachlan at Speakers Corner at Hyde Park in London in 2017.

The feminist group known as The Countess, who oppose moves to have ‘genderless’ toilets in schools,  and speak out against housing biologically male rapists in women’s prisons – are described as Irish TERFs by their opponents. The hostility towards them expressed and clearly shared by some who are prominent on the Irish left is common. When a British group of feminists calling themselves We Need to Talk attempted to organise a meeting here in 2018 they were opposed by several prominent Irish lefties including Annie Hoey of the Labour Party, who now sits in the Seanad alongside Lynn Boylan.

Anyway, you get the picture. TERFs are “not welcome” in Ireland by the extreme left of the feminist movement. Which is fair enough. They don’t have to welcome anyone. They do, however, perhaps need to realise that threatening to “cut” people – which is a pretty unambiguous threat when you think about it – is not acceptable.

And it certainly ought not be acceptable for a member of the Oireachtas to be seen to be in any way approving of such sentiments.

Boylan seems to have removed her Twitter account entirely following a backlash online to ‘liking’ the photo of the ‘terf-cutting’ sticker.

“It is really wrong when our politicians endorse violence against women. TERF is language used to dehumanize women who point out there are complexities when you allow self-ID without balancing existing equality protections for women,” said Iseult White.