The hunt is on for the savage killers who gunned down a dozen Vienna residents and attacked a synagogue in the Capital of Austria.

A huge manhunt is under way after gunmen opened fire at multiple locations across central Vienna, killing at least four people and wounding several more.

One of the suspected killers, identified as an Islamic State group sympathiser, was shot dead by police who said they were searching for at least one more assailant still at large.

The attacks, in six locations including near a synagogue in the centre of the city, were carried out by "several suspects armed with rifles", police said last night.

The shooting began just hours before Austria was to reimpose a coronavirus lockdown, with people out in bars and restaurants enjoying a final night of relative freedom. 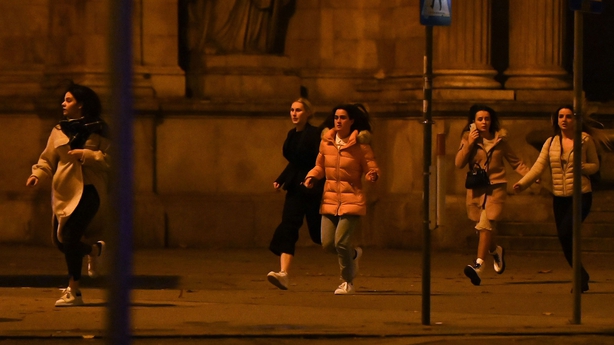 Vienna mayor Michael Ludwig earlier said that 15 people had been taken to hospital, seven of them seriously wounded.

Police said an officer had also been hurt during the attacks.

The attacks started at around 8pm (7pm Irish time) when the first gunshots were heard in the city's centrally located first district.

Interior Minister Karl Nehammer told a press conference this morning that the dead attacker was "a radicalised person who felt close to IS".

"All the signs make it clear it's a radicalised person and a person who feels closely connected to IS."

Police had used explosives to blast their way into the apartment of the dead man who had been "heavily armed", the minister added.

He had earlier noted that "according to what we currently know, there is at least one attacker who is still on the run".

It was unclear how many attackers were involved in the assault.

Speaking to ORF, Austrian leader Mr Kurz said the attackers were "were very well equipped with automatic weapons" and had "prepared professionally".

He had tweeted: "Our police will act decisively against the perpetrators of this repulsive terror attack.

"We will never be intimidated by terrorism and we will fight this attack with all means".

Mr Kurz said that while police were concentrating on the anti-terror operation, the army would take over the security of major buildings in Vienna.

Mr Nehammer urged Vienna residents to remain in their homes and keep away from all public places or public transport.

He said that children would not be expected to go to school today. 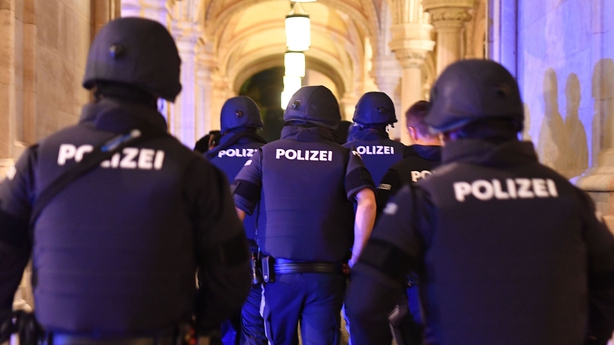 Sirens and helicopters could be heard in the city centre as emergency services responded to the attack.

Large numbers of police were seen guarding an area near the city's world-famous opera house.

The location of the initial shooting was close to a major synagogue.

The president of Vienna's Jewish community Oskar Deutsch said that shots had been fired "in the immediate vicinity" of the Stadttempel synagogue.

However, he added that it was currently unknown whether the temple, which was closed at the time, had been the target of an attack. 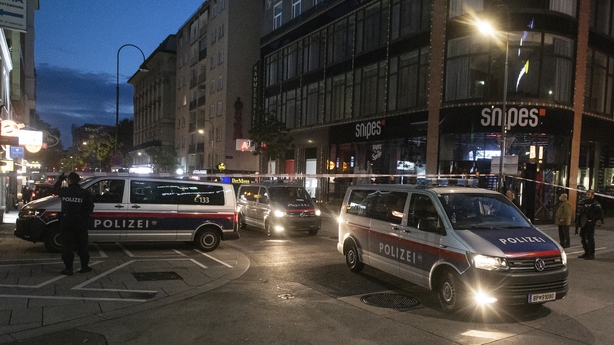 Condolences poured in from around the world, with top officials from the European Union, France, Norway, Greece and the United States expressing their shock at the attacks.

Minister for Foreign Affairs Simon Coveney said: "Thoughts are with our friends in Austria tonight after a terror attack in Vienna."

President Emmanuel Macron of France, which has seen two serious attacks recently, tweeted that "we French share the shock and sorrow of the Austrian people".

US President Donald Trump said in a tweet that "our prayers are with the people of Vienna after yet another vile act of terrorism in Europe".

"These evil attacks against innocent people must stop. The US stands with Austria, France, and all of Europe in the fight against terrorists, including radical Islamic terrorists."

Democratic presidential candidate Joe Biden condemned what he called a "horrific terrorist attack," adding: "We must all stand united against hate and violence."

Czech police said they were conducting random checks on the border with Austria.