When Marxist extremists call for "Active Anti Racism" what they really mean is turning our country into an even more liberal PC basket case.

Freedom of expression does not extend to hate crime and Irish people need to accept that “it is not enough to be anti-racist but that there is a need to be actively anti-racist,” said Amnesty International Ireland’s executive director Colm O’Gorman.

“There is a need to be more than reactive,”he said.

Mr O’Gorman was responding to two incidents in recent days, one in Dublin and the other in Galway.

On Friday evening Xuedan (Shelly) Xiong was allegedly racially abused before being pushed into Dublin’s Royal Canal by a group of teenage boys while walking near Ashtown.

Last week it emerged that NUI Galway had requested Garda assistance in its investigation of the alleged racist abuse of a woman of colour on its campus by a middle-aged man, as posted on social media.

Mr O’Gorman called for research by the State into the incidence of physical and verbal racist abuse in Ireland. Such abuse also extended to members of the LGBT+ community, as well as other minorities, he said.

“There’s no data, though we know from experience that such incidents are common where some people are concerned,” he said. 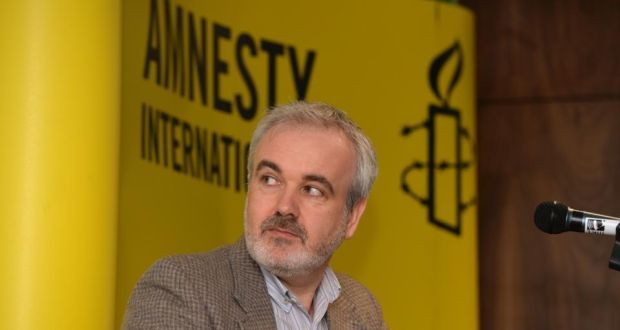 He believed the Garda definition of such abuse was “very, very good,” being based “on a person’s experience of such abuse as being motivated by hate. It’s a very solid definition.”

Freedom of expression “doesn’t extend to hate crimes, online or in the street,” he said. “Bigotry, prejudice exists right across society and has to be confronted.”

Legislation
Sineád Nolan of the Irish Council for Civil Liberties noted how it had called earlier this year for the Prohibition on Incitement to Hatred Act to be reviewed. “Has it been effective in prohibiting speech which amounts to incitement to hatred? And if not, why not?” she asked.

What was needed was “more research, including consultations with impacted groups, to tell us why this is. We certainly need to redefine the legislation so that all targeted groups are explicitly protected. We may also need to recalibrate the Act so that it better achieves its aims while not unduly impacting on freedom of expression,” she said.

Education
Both Ms Nolan and Mr O’Gorman highlighted the central role of education and schools in addressing such abuses of people.

In a statement on Sunday, the Garda said it was “actively investigating” these recent cases. “Hate crime is abhorrent and we treat such incidents seriously. Anyone with information on these incidents or any similar incident should contact us directly,” it said.

Hate crime was “any criminal offence which is perceived by the victim or any other person to, in whole or in part, be motivated by hostility or prejudice, based on actual or perceived age, disability, race, colour, nationality, ethnicity, religion (including non-believers), sexual orientation or gender,” it said.

Anyone who “experienced an act of violence, intimidation or hostility because of who you are” may be a victim of hate crime, the Garda statement said.

It defined such crime as “ verbal abuse, intimidation, threats, harassment, assault or criminal damage to your property and can impact individuals, families and communities.”

The Garda “takes hate crime very seriously” it said and promised to investigate all reports of such crimes “thoroughly and sensitively”.