The treasonous child killers in Sinn Fein have betrayed the Irish people yet again with their support of extreme Westminster abortion legislation in an attempt to bring legislation in line with the Free State, supporting abortion on demand for the first 12 weeks despite voting against the murder of disabled children up to birth.

The Stormont Assembly has voted in opposition to new abortion regulations that include terminations up to birth in cases of serious non-fatal disabilities.

The outcome of Tuesday evening’s debate in the devolved legislature does not change the recently introduced liberalised abortion law in the region.

A DUP motion rejecting the “imposition” of abortion regulations by Westminster passed by 46 votes to 40. One MLA abstained

Some SDLP, UUP and Alliance Party representatives voted with the DUP while others opposed it.

While the motion rejected the new regulations in their entirety, it focused on the regulation that permits abortions up to birth in cases of severe disability.

It referenced the campaign by disability rights activists Heidi Crowter, who has Down’s Syndrome and who claims such laws are discriminatory.

Sinn Fein tabled an amendment that also called for the rejection of the non-fatal disability regulation, but did not include any demand for the broader regulations to be axed.

That amendment was defeated 32 votes to 52, with three MLAs abstaining.

MPs are due to vote on the abortion regulations, which were introduced in March, at Westminster later this month.

If they are voted down the Government would face the prospect of having to redraw new regulations.

Northern Ireland’s restrictive abortion laws were changed by MPs last year at a time when the Stormont Assembly was collapsed.

DUP MLA Paul Givan welcomed the outcome of the debate.

“The Assembly has now rejected these extreme abortion regulations on the basis of how they discriminate against the unborn especially those with disabilities,” he said.

Mr Givan said the regulations must be withdrawn.

“The regulations imposed by Westminster have led to Northern Ireland having the most liberal abortion regime in Europe,” he added.

“This approach undermined the devolution settlement, but worst of all facilitated the ending of so many precious lives. That is something that the majority of people here in Northern Ireland are against.”

From March 31, when the regulations were introduced, to May 22, a total of 129 abortions were carried out in Northern Ireland.

Sinn Fein MLA Emma Sheerin said the DUP could not be allowed to “block access to modern, compassionate healthcare”.

“The motion as put forward by the DUP is quite obviously an attempt to undermine the entirety of the abortion provision which has thus far been put into law in the north of Ireland,” she said.

Ms Sheerin said her party’s amendment had been an attempt to “refine” the law, to bring it into line with regulations in the Irish Republic.

She added: “Our party position is one which calls for a compassionate and reasonable approach to healthcare, but not one that would see abortion treated as a mainstream, normal option.”

Some pro-choice campaigners had criticised Sinn Fein’s stance, claiming the party had undermined its advocacy of abortion reform on both sides of the border.

Earlier, party president Mary Lou McDonald tweeted: “Sinn Fein wants those same rights secured for women in the South to be delivered in the North. Nobody left behind.” 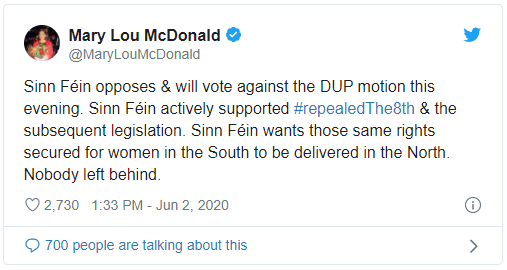 Under the regulations abortion is legal in all circumstances in the first 12 weeks of pregnancy.

When the pregnancy poses a risk to the woman’s physical or mental health the time limit is 24 weeks.

Abortions are permitted at any time up to birth when there has been a diagnosis of a fatal foetal abnormality or where the child is likely to suffer severe mental or physical impairment.

Anti-abortion campaigners claim this discriminates against disabled people and allows for unlimited terminations for conditions such as Down’s Syndrome.

They welcomed the vote.

Catherine Robinson, from Right to Life UK, said: “Tonight’s vote has made it clear that the UK Government must urgently hand back this devolved matter to the elected representatives of the people of Northern Ireland at the Assembly.

“The UK Government and Westminster now have absolutely no mandate whatsoever to impose these extreme regulations on Northern Ireland.”

However, pro-choice organisations insisted the vote did not change the law.

Grainne Teggart, from Amnesty International, said: “This motion has no impact on the abortion law or regulations in Northern Ireland.

“Although this sends a disappointing message that some MLAs are not willing to stand fully for human rights, women and girls should rest assured that the hard-won abortion reform remains intact.”