Creagh Lane sex abuse survivors are protesting an Taoiseach's cynical use of their struggle for justice.

A group of men who were sexually abused as children in their primary school in the 1960s have accused the Taoiseach of having used their story in the lead-up to the last election "for political gain".

The men, who were abused by their teacher in the 1960s at Creagh Lane school in Limerick, have been seeking redress from the State for the past 10 years.

They say that while successive governments, Taoisigh, Ministers for Education and Opposition leaders have promised to resolve their case, nothing has happened.

Today the men protested outside the Department of Education and Leinster House, calling on Taoiseach Micheál Martin to take personal responsibility for addressing their grievance.

Speaking outside Leinster House, Tom Hogan sad that Mr Martin had "used our issue in pre-election campaigning and used it passionately and yet since he was elected we have had no communication from him. He seems to be ignoring us completely".

Minister for Education Norma Foley came out to meet the men as they stood outside.

Dave Phayer told her they were "begging" her to resolve their long-running grievance.

"You can't keep putting us through this. You are turning a blind eye. All we want is for you to stop this and allow us enter the redress scheme and get on with our lives," an emotional Mr Phayer told the minister.

The minister thanked the men for coming. She said she was awaiting the outcome of a review and that it would be premature of her to say anything before that review had concluded. She declined to give a commitment to resolve the issue by the end of this year.

Limerick Fianna Fáil TD Willie O'Dea said that he "bitterly regretted" that the matter was still not resolved.

Asked about commitments that Micheál Martin had given the men when he was in opposition that he would address their problems when in government, Mr O'Dea said it was "not good enough".

Today is the fifth time in recent years that the 'Creagh Lane men', as they are known, have travelled from Limerick to Dublin to try to draw attention to their situation through protest.

A State redress scheme was established for survivors of abuse in national schools, after the European Court of Human Rights ruled in the Louise O'Keeffe case that the State did share liability for their abuse.

But the Creagh Lane men are among what is believed to be hundreds excluded by the scheme’s narrow interpretation of the European court ruling. 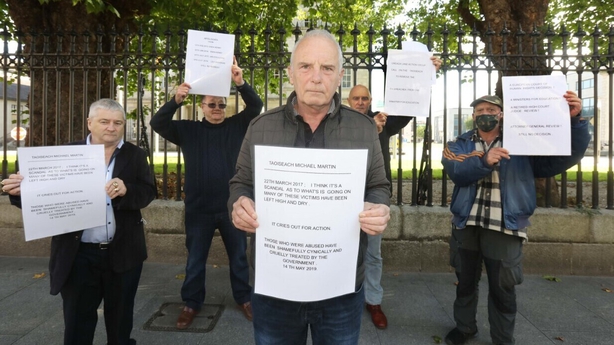 A year ago, the Government accepted a former judge's finding that that the conditions of that scheme were "inherently illogical", "fundamentally unfair" to applicants, and should be changed.

Iarfhlaith O'Neill made his findings after conducting a review commissioned by the Government.

Responding to the judge's conclusions in the Dáil last year, the then minister for education Joe McHugh promised "action not words". He established a second review.

Since then, the scheme has made offers of compensation to 16 survivors, and the Department of Education said that 15 have been accepted.

But there has been no offer made to the Creagh Lane men and others.

The Department of Education was due this month to update Europe's Council of Ministers on progress in implementing the O’Keeffe ruling. However, it sought, and was granted, an extension to December.

In a statement, it said: "Because of the complexity and sensitivity of the issues involved, the matter requires careful deliberation and this is still in process."

The men are all now aged in their 60s. They say the issue has "taken over" their lives.

"There is no logical explanation behind the delay," John Boland told RTÉ News.

"Micheál Martin was very vocal in supporting us when he was in opposition, and we are calling on him now to stick to his word.

"He told us that when he got into government we would receive our redress."

Mr Boland is among 19 men who secured convictions in 2009 against Sean Drummond for abuse they suffered when he was their teacher at the Limerick city school in the 1960s.

Speaking in the Dáil in May of last year, Micheál Martin was strongly critical of the State redress scheme that had been established and the limitations it set on applicants.

He said victims had been "shamefully, cynically and cruelly treated by Government over the last number of years".

The Creagh Lane men are calling on Mr Martin, as Taoiseach now, to take direct responsibility for ensuring that their claims are accepted by the scheme and that they are offered compensation.