French Catholics on Sunday celebrated the All Saints religious festival under heavy security, as police made two new arrests over an attack on a church in the southern city of Nice blamed on an Islamist knifeman.

Three people were killed in the knife rampage Thursday in the Notre-Dame Basilica that prosecutors say was carried out by a young Tunisian recently arrived in Europe.

It was the latest attack in France to be described by the government as an act of "Islamist" terror, in the wake of the republication of cartoons of the Prophet Mohammed by the Charlie Hebdo weekly in September.

In Nice, three men were released from police custody on Sunday after authorities determined they were not linked to the suspected attacker Brahim Issaoui, a source close to the investigation said.

Three men remain in custody, including a 29-year-old Tunisian suspected of migrating with Issaoui from their homeland to France.

The tensions did not prevent Catholics going to church to celebrate the All Saints holiday in Nice, authorities allowing an exemption during the coronavirus lockdown.

"I was apprehensive, I was scared of coming," said Claudia, 49, as she went to church, reassured by the presence of heavily armed soldiers.

"We need to show that we are not scared and we are here," she said, following several other worshippers into the church, where around 150 people attended an early evening mass honouring the three victims. 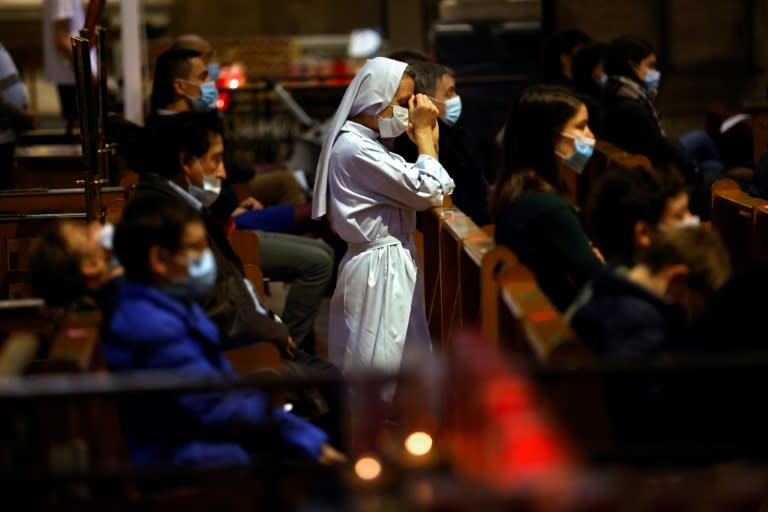 Issaoui was shot by police multiple times and is currently in a serious condition in hospital. Investigators have been unable to question him and his precise motivations remain unclear.

But Interior Minister Gerald Darmanin said that Issaoui "had clearly gone there (to Nice) to kill".

"Otherwise how can we explain why he armed himself with several knifes having only just arrived?... He clearly did not come just to get his papers," Darmanin told the Voix du Nord newspaper.

The 21-year-old arrived at the mainland Italian port of Bari on October 9 before arriving Nice just two days before the attack.

The latest men to be detained, aged 25 and 63, were arrested Saturday at the residence of the 29-year-old Tunisian, who was arrested earlier in the day, a judicial source told AFP.

The detained Tunisian is "suspected of mixing with" Issaoui during their journey to Europe, the source close to the investigation told AFP, adding he also likely arrived in France recently.

France is on edge after the republication in early September of cartoons of the Prophet Mohammed by Charlie Hebdo, which was followed by an attack outside its former offices, the beheading of a teacher and the attack in Nice.

On Saturday, an attacker armed with a sawn-off shotgun shot a Greek Orthodox priest before fleeing in the French city of Lyon.

Nikolaos Kakavelaki, 52, was closing his church when he was attacked and is now in a serious condition.

A suspect was initially detained, but was released on Sunday after investigators found no evidence he was connected to the shooting.

Prosecutors say they are keeping all hypotheses open but so far have not referred the case to anti-terror colleagues.

This comment prompted a storm of anger in the Muslim world, with furious protests held in numerous countries.

In Pakistan's commercial hub of Karachi on Sunday, protesters outside the French consulate burnt images of Macron and tread on the French flag, an AFP photographer said.

Macron sought to quell the anger by saying in an interview with an Arab TV channel on Saturday that he could understand Muslims could be shocked by the cartoons.

On Sunday, French Prime Minister Jean Castex lashed out at previous "complacency" over the "ideological battle" against radical Islamism.

"I want to denounce here all the compromises that have been made for too many years, the justifications for radical Islamism: 'we should flagellate ourselves, regret colonisation," he told TF1 television.

"The first way to win a war is for the nation to come together, be united, proud of our origins, of our identity, of our Republic, of our freedom. We must win this ideological battle," he said.