Stormont finance Minister Conor Murphy has rejected a suggestion that he misled the Assembly over his attempt to jointly secure an order for personal protective equipment (PPE) with the Irish Government.

Ulster Unionist Party leader Steve Aiken said in the Assembly on Tuesday that Mr Murphy had “at best misrepresented this house” when he spoke about an “order” for PPE from China to help key workers dealing with Covid-19.

Mr Murphy told the Stormont finance committee on Wednesday that its chairman, Mr Aiken, had wrongly accused him of misleading the Assembly over the PPE issue. He said Mr Aiken had misquoted what he had said and that it was actually the UUP politician who had “misled” the Assembly. 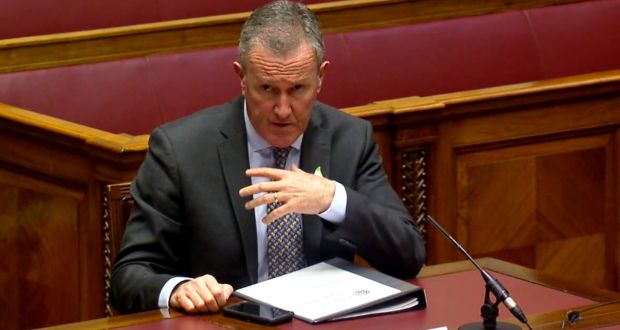 “You uttered words by me that were never uttered by me at any stage,” he told Mr Aiken.

Mr Murphy on March 27th said a “very significant” PPE order from China had been jointly placed with the Irish Government. However, he clarified last Friday that it had been “agreed that orders would be placed through North-South collaboration” on March 27th but that the presence of major players in the market such as the US and India had meant the order could not be completed.

Mr Murphy said his department had “placed the order with Dublin” but the Irish Government, which was operationally involved in the process, was unable to complete the joint procurement because of the market pressures.