No Room For Faith At The Nationalist Table

"We have outlived the need for Catholicism" is the progressive mantra that is to be expected in these amoral times however,  “There is no room for religion, especially Catholicism, in nationalism”, a cry all too common in nationalist circles these days,  is far a more troubling phenomenon.

It could be argued that this rejection of Catholicism is founded upon emotionalism rather than reason, associating negative conditioning with unpleasant personal experiences endured at the hands of certain malevolent religious. A simple syllogism might explain it. All religious represent the Catholic Church, Father Murphy and Sister Dympna belong to the religious, Father Murphy and Sister Dympna were bad, therefore the Church was bad. While the structure of this argument might appear valid, the major premise or predicate is unsound. The predicate or major premise “all religious represent …” is an equivocation or misleads the reader. What does “represent” mean exactly? In one sense the premise might appear sound as priests and nuns are vocational orders within the Church but do the distorted vicarious actions of agents corrupt their principal? In law, the concept of “ultra vires” or acting beyond the scope gives us a clue. A driver who allows passengers in his delivery van and then crashes, are his actions imputed to his employer for liability? The answer is no, the driver was operating outside the scope of his employment.

While dioceses were held liable for the malevolence of their staff, by and large the liability came not because the abusers were priests and nuns but because the principal, i.e. the bishop covered up abuses. Well then, is the bishop not a true representative of the Church? In one respect he is. He is in apostolic succession and chosen by the pontiff. However, under the concepts of synodality and collegiality, all bishops are autonomous. Each bishop is essentially self-governing and equal, with the exception of the Bishop of Rome, to all other bishops. On matters of local governance, one bishop cannot tell another bishop how to run his diocese. But what if a bishop is corrupt? The matter is referred to the Pope. Does this mean the Pope is responsible? In some respects, yes. However, Popes too have been very corrupt. Hang on, this means that responsibility goes all the way up to the top and therefore this is a Church problem. Again, equivocation comes into play. The Church has different meanings. It is not merely a composition of its members, but a spiritual and impeccable entity decreed by Christ. No ordinary human being is impeccable. They are flawed as we are all flawed. When anti Catholic nationalists invoke their distaste for the Church, they erroneously conflate the actions of fallible human beings with the infallible impeccable entity that is the bride of Christ. Similarly, one cannot challenge the propriety of say, the concept of a triangle with a poor drawing of one. The concept of a triangle is a metaphysical form while a poor drawing is a mere depiction of the form. 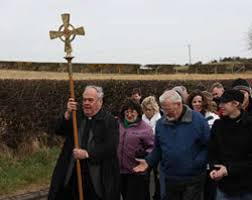 There is no doubting the Catholic provenance of most of the heroes of 1916, including the socialist, James Connolly who having returned to the faith received the sacraments before his execution. To excise religion, in particular Christianity, from Irish nationalism would be like resuscitating only part of a man. While some critics of Christianity, or to be precise, Catholicism look to tragic tale of the Action Française.

A French reactionary nationalist movement founded by Charles Maurras, it strove to restore the monarchy, end the separation of church and state, and uphold France’s traditional Catholic identity. The movement was vehemently opposed to modernism as liberalism and pursued of economic and political beliefs that were solidly in accordance with Catholic social teaching. Although Maurras was an agnostic, he advocated for the necessity of the Catholic faith within nationalism. Action Française provided most of the committed activists in the conflict that waged between Catholicism and secularism during the beginning of the 1900s in France.

However, much like today, the Church hierarchy and its intellectuals began to accuse the movement with being extraordinarily militant, too political, and nationalistic. However, the real reason for the opposition was that the Church became anxious that the nationalist movement was siphoning young Catholics in the direction of an ideology which the hierarchy didn’t control.

The Falangists of Spain too met with similar hostility despite defending the Church against far-left attacks and promoting Spain’s traditional Catholic identity. The rejection of De Rivera and the Falange by the Church was ostensibly on the grounds of it being too nationalistic and too masculine but was it? The real opposition was similar to the experience of Action Française, the loss of Church power over its people.

Surely this provides ample evidence to reject religion, and in particular Catholicism, from playing a central role within Irish nationalism. Not so fast! The charge would be true if one conflated ideology with particularised individual behaviour. The key difficulty is not with Catholicism per se but rather the behaviour of the hierarchy and their need for control Catholics. From a theological perspective the need to control is understandable given the requirement for uniformity with regards to spiritual matters. Over 30,000 protestant denominations, arising out of the reformation and its penchant for diverse exegesis, demonstrates why the Church wishes to keep a tight rein on spiritual truth and belief. Nevertheless, Church control ought to be confined to ecclesiastical matters, and by extension morality, but not those pertaining to political ideology. For those who criticise the role of Christianity in nationalism they perpetuate a confusion. It is like attacking “parenting” because of the actions of very controlling parents. There is nothing wrong with “parenting” per se, if performed functionally it is extremely beneficial, if not wholly necessary, for the proper raising of children.

The Church today is sadly awash with aberrant progressive and weak-willed clerics who argue that the true interpretation of Christianity is found in its universalism, and in their eyes, as applied to leftist causes. This may explain why today many clerics behave more as activists and social workers rather than spiritual advisors. However, the problem is not with the Church per se but will poor formation of its religious, a religious who have largely abandoned supernatural faith for temporal materialism. One cannot blame the faith for those who have none.

Many nationalists denounce the Church on the basis of its ‘universal application’ but in doing so miss the point entirely. Universalism is NOT the same as globalism. To be universal in the context of the Church and its teaching is to recognise truth, the belief that Jesus Christ died on the cross for our eternal salvation, that He established a Church on earth, one which the early Church fathers acknowledged as the Catholic Church. If one was to reject Christianity, and in particular Catholicism, on the grounds that it promotes ‘universalism’ one may as well reject mathematical proofs for being universally true too however the equation, 2+2=4 , validly applies in Dublin as well as in the forests of the Amazon.

From top down, the Church seems to be run by leftists and Pope Francis is a prime example of this ideological fidelity when the pontiff pushes mass migration and one world governance. Pope Francis also promotes paganism, protects homosexual predators and is considered by many orthodox Catholics to be a heretic.

The Church as the bride of Christ is impeccable, its members, including the clergy of all ranks are not they remain distinctly human and limited. While Irish history is littered with Church complicity (see Irish genocide aka famine) and some genuinely evil clerics such as child abuser Brendan Smyth , it also contains great holy martyrs like St Oliver Plunkett and other devout patriots, drawn from the clergy and laity alike.

If Irish nationalism ignores its metaphysical foundation, a foundation laid solidly upon the lives of many devout Irish Catholics and the faith they defended, it will not only act as the gravest mark of disrespect to the plight of our ancestors, as well as denys the historical record of our people but will places the nationalist idea on an unstable bed of sand and destined to fail.