Pedophile Information Exchange (PIE) founder “among the founders of ILGA”

The ILGA has now released a statement which states that “ILGA World categorically, and in no uncertain terms, does not advocate to eliminate or lower the general age of consent, nor supports paedophilia in any way, shape or form – and never has.” We have requested clarification from the ILGA as to why they would sign on to a letter calling for changes to the age of consent if they do not support such a move, but we have yet to receive an answer. We will update this piece when we do.

The International Lesbian, Gay, Bisexual and Intersex Association (ILGA), which Gript recently reported had signed a ‘Feminist Declaration’ which called on governments to elimination of “all laws and policies” that stop adolescents from consenting to sex, counts prominent paedophile activist Ian Dunn as one of its founding members.

Dunn helped found the Paedophile Information Exchange (PIE) in 1974. PIE, according to the Independent Inquiry into Child Sexual Abuse, “openly campaigned for the lowering of the age of consent and made concerted efforts to normalise and justify sexual relationships between adults and children.”

Journalist Christian Wolmar talked with the BBC about PIE’s tactics, saying “They didn’t emphasise that this was 50-year-old men wanting to have sex with five-year-olds. They presented it as the sexual liberation of children, that children should have the right to sex.”

Dunn denied being a paedophile himself, although the Times quote Dunn as saying “I am not one of those homosexuals who get cross or nervous when the subject of love between men and boys is raised.” Dunn helped organize pro-paedophilia meetings in multiple cities and his home address was used as the point of contact for PIE’s magazine, Minor Problems – a publication he had urged people to support.

At Dunn’s funeral a young man told the assembled mourners that Dunn had raped him when he was 15.

1974 also saw the setting up of the International Gay Association (IGA), an entity which would, in 1978, become the ILGA.

Whilst Dunn’s name is not mentioned on the history of the ILGA provided on its website ILGA material has previously referred to Ian Dunn as being “among the founders of ILGA.” 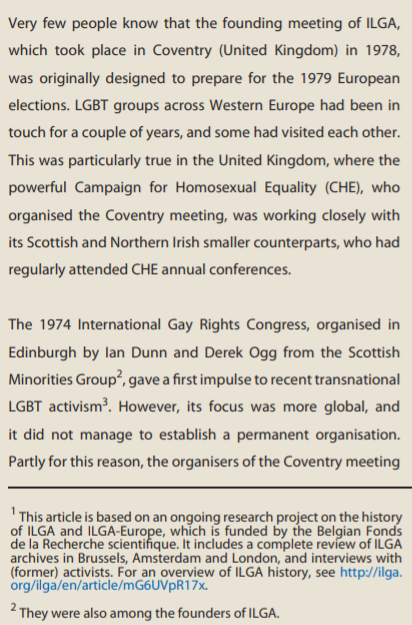 The ILGA’s website does highlight that the ILGA was founded “at a fringe meeting at the annual conference of the Campaign for Homosexual Equality”, by representations of groups which included “Scotland (SHRG).” SHRG refers to a group called the Scottish Homosexual Rights Group, which was founded by Ian Dunn, in the drawing room of his parent’s house, and which was known, until 1978, as the Scottish Minorities Group (SMG). The group still exists, although it has now changed its name to OutRight Scotland.

The Pedophile Information Exchange originally formed as a group within the SMG.