The immigrant invasion continues at the Greek border as violent clashes between police, migrants and Far-Left extremists spiral out of control.

The clashes took place on Thursday between Athens police and protesters, which included healthcare professionals and teachers demanding better working conditions during the Wuhan coronavirus outbreak.

Police say that a mob of violent rioters vandalised a tram station and used homemade Molotov cocktails as well as other projectiles against officers, Greek newspaper Kathimerini reports.

Riot police were then forced to deploy tear gas and other non-lethal weapons in order to control the crowd before arresting at least ten people from the violent mob. 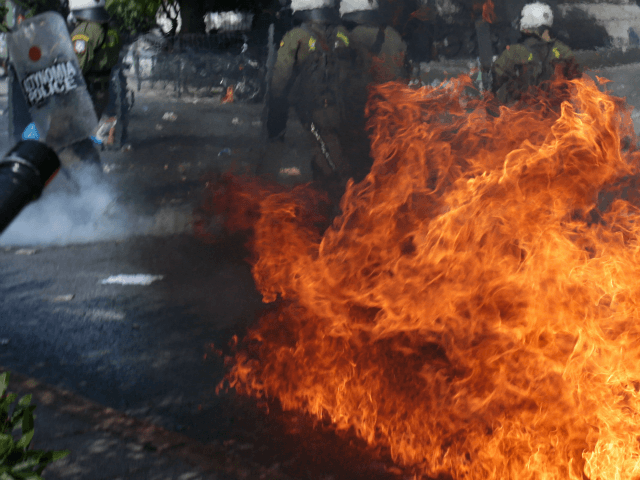 Footage of the riots was published by Greek newspaper Proto Thema, including a video showing rioters smashing the tram station.

The incident is just the latest to see police attacked with Molotov cocktails during protests in recent months. Earlier this month in Athens, two foreign nationals were arrested after they threw Molotov cocktails at police following another student-led protest.

“It was determined that those arrested were part of a group of people who, in front of the Monument of the Unknown Soldier, attacked the police forces with Molotovs, flares, stones, marbles, and other objects,” local police said in a statement.

Just weeks before, at least 51 far-left Antifa extremists were taken into custody after a demonstration in the city of Thessaloniki. After the arrests, police confiscated 28 stick weapons, a metal baton, and a Swiss army knife.

The protests in Thessaloniki came after police evacuated the “Terra Incognita” squat used as a headquarters by far-left extremists in the city, which investigators claimed was used to plot attacks on police and political opponents.

Three OLA members were arrested, and 22 pounds of explosives were seized from an Athens warehouse linked to the trio.