Horrific child sex abuse case in which 280 charges of child rape and child pornography was adjourned yesterday with the defendant being sentenced to only 12 years in prison!

A MAN WHO subjected his vulnerable step-daughter to daily rape and sexual abuse and repeatedly forced her to video herself using a sex toy has been sentenced to 12 years in prison.

The Central Criminal Court heard that during one incident of oral rape the child’s mother walked in and caught the man. She told him that it should not happen again but the abuse continued.

The now 16-year-old girl and her siblings have been in State care since she disclosed the abuse to a classmate in the special school she attends. She is now only allowed supervised access with her mother.

The 41-year-old man pleaded guilty to 12 charges of rape, 12 of oral rape, 11 charges of exploitation and six charges of production of pornography on dates between November 2015 and October 2018 at their family home when the girl was aged between 11 and 14 years old.

The pleas were accepted by the State on the grounds that they are sample counts representing 288 charges in total. The man, who is a foreign national, has no previous convictions and came to Ireland in 2010.

David Humphries BL, prosecuting, said the now 16 year ago girl is considered a “vulnerable child” and had been attending a local special needs school.

She told specialist garda interviewers in February 2019 that the man made her have sex with him and take photos and videos of herself for him on her mobile phone, while her mother was at work.

The girl said the man threatened to keep her out of school or take her phone off her if she didn’t do as he asked. He admitted to gardaí that he told the girl he would publish the photos online if she did not do as instructed.

A local detective garda said the man was arrested in June 2019 and admitted that there had been at least 70 incidences with his step-daughter, outlining that he raped her at least 50 times and had at least 20 recordings of her.

He told gardaí “it felt bad but at the same time I felt good”. He said he had told her “this is our little secret” and accepted that she would have been afraid of him.

The detective garda said the man later stated that he had abused the girl 120 times or more and said that in one day she had taken 50 photographs of herself with a selfie stick under his instruction. He claimed he never shared the recording or photographs with anyone else.

The garda said the girl has been in state care since January 2019 and is currently attending a child psychologist. 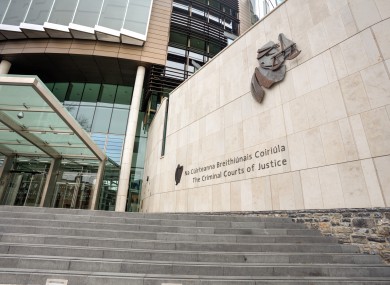 Mr Justice Paul McDermott suspended the final year of a 12-year sentence on strict conditions including that the man engage with the Probation Service for a year and undergo the appropriate sexual offender’s treatment while in custody and for a year upon his release.

He also imposed a five-year post release supervision order and said that the man is to have no contact with the victim or any unsupervised contact with any child.

Mr Justice McDermott described the abuse as “appalling” degrading and humiliating and said the man’s “continual actions were a daily feature of the girl’s childhood”. He said it required a degree of planning and manipulation and he showed no respect for her as a human being.

He noted the abuse continued despite the fact that the man was caught by the child’s mother and added that the woman provided little protection for the child, stating that she was the only other adult the girl could turn to for support.

He acknowledged that the man’s plea of guilty saved the girl the ordeal of giving evidence at trial and accepted that he had assisted gardaí in retrieving deleted files from his laptop. He said he hoped that in time the man would gain “real insight into the damage he has done”.

A victim impact report stated that for the first few months with her step-father she thought he was nice but said she soon realised “he was only pretending”.

“I knew later that he was not a good father figure to me,” she continued.

She said she was afraid to say anything because she didn’t want her family to break up. “You think that your parents are supposed to look after you. I called him ‘Dad’,” she said.

She said she “would like to know why? Why did you do that to me? What was point of doing it. I would like an apology from him. He should not have done it.”

She said the man told her it would be all her fault if the family broke up. “I would never know what it would feel like to be safe or the right thing to do when bad things happen. I knew things that I didn’t want to know at my age.”

“I hope I can keep myself safe in my relationships in the future,” the girl continued before she added “I now know what safe feels like,” referring to the foster family she has been living with since being taken into care.

The detective garda agreed with Ronan Munro SC, defending, that during questioning the man “was very emotional at times and other times he put his hands over his ears because he couldn’t listen to what was being said”.

He accepted that the man acknowledged that he had ruined the girl’s life and had moments of insight into his behaviour.

Munro submitted that his client had “made unguarded admissions through guilt and remorse”. Counsel told Mr Justice McDermott that it seems his client “cannot cope with what he has done” but he wanted his step-daughter to know that it is his fault and his fault alone.

“He is sorry for what he has done, She needs to know that the blame belongs to him and he hopes that gives her some comfort,” Munro said.