It has emerged that prominent members of Saoradh, a far-left group that police say is the political wing of the New IRA, yesterday attended the “Rally for Peace on Earth – Against the Politics of Hatred” event, which was organised and supported by some of Ireland’s largest NGOs. 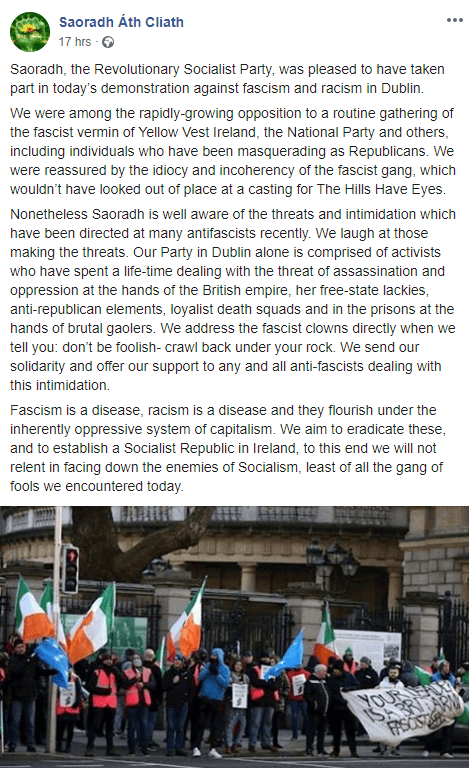 Saoradh are most well known for their links to the murder of journalist Lyra McKee in Belfast on April 18th of this year. McKee was shot in the head by the New IRA during a riot in Derry, an action which was described by Brian Kenna, the chairman of Saoradh as ‘regrettable’ before he added that more violence in Northern Ireland was ‘inevitable’.

The office of Saoradh was later raided during the investigation into the death of McKee. Saoradh sent out a press release following the raid alleging that the media were “clearly complicit in the attacks on Republican families” and that this “may in future endanger members of the press”.

The event was organised as a counter-protest against a free-speak protest which had chosen Saturday to protest in order to mark the end of the public consultation on the Government’s plans for broader hate crime laws. Organisers of the rally say that it was designed to fight back against the ‘rising hate of the far-right’.

The event Saoradh attended was supported by Trócaire, The Union of Students in Ireland, SIPTU, the Irish Network Against Racism, the National Women’s Council of Ireland, the Transgender Equality Network Ireland, the Irish Refugee Council, the Abortion Rights Campaign, the Irish Council for Civil Liberties, Oxfam, and numerous other.

This is from the official flyer promoting the event

Sinn Fein TD Louise Reilly attended the event, later sending a tweet saying that she was proud of the young Sinn Fein members who had attended the event and that “Politics is about choices..it’s about picking sides..I know what side I am on & have always been on”.