Lockdown Ireland looked on in horror at the sight of Irish Defence Forces hoisting the blue flag of the United Nations in front of the GPO on Easter Sunday.

Surely our eyes were deceiving us? Could it be that Corona Cabin fever was wreaking havoc with our perceptions? After the recent Black and Tans debacle surely our leaders wouldn’t kick us again when our spirits are so obviously worn from this horrific COVID19 crisis?

Alas our eyes did not deceive us, and worse still our Taoiseach, Leo Varadkar, revelled at the sight of this foreign flag waving jauntily in our capital’s main thoroughfare, O’Connell Street. To him of course it all makes complete sense as this was a perfect opportunity to implant in the captive natives’ psyche the globalist vision he and his masters have for our beloved Ireland. 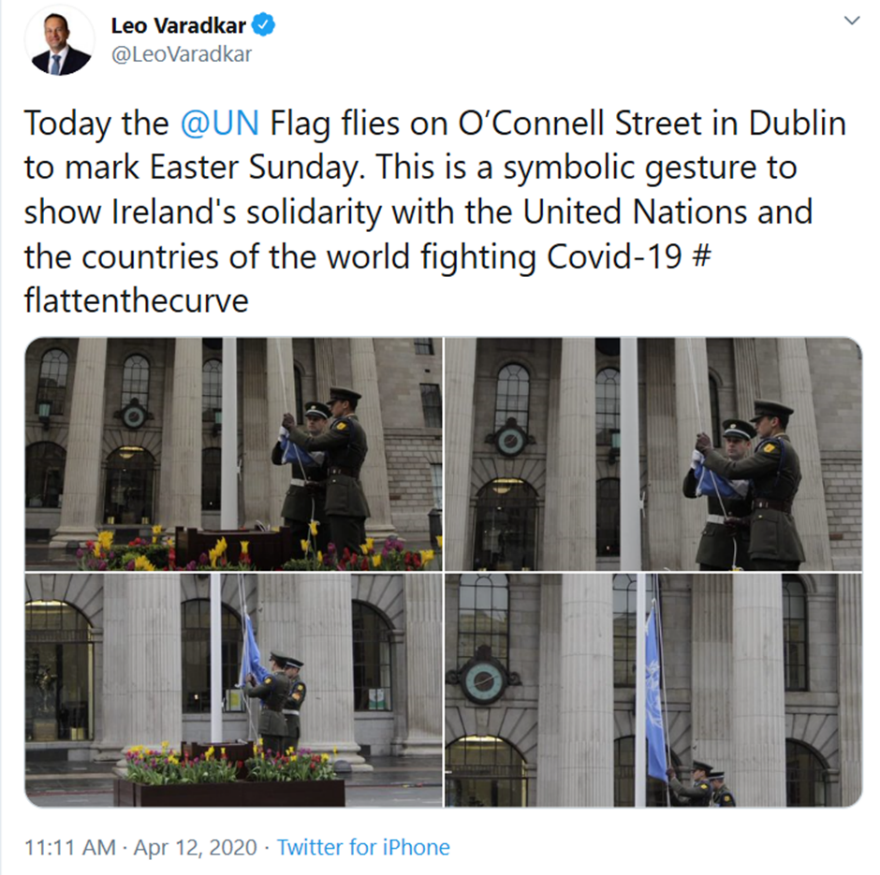 We can reveal that this display of global power has been happening all across Ireland for the last year. Not in full view of course, but under the radar, in every secondary school across the land. In early 2019 the ‘Global Schools’ programme was launched as part of the Government’s ‘Global Ireland’ initiative. 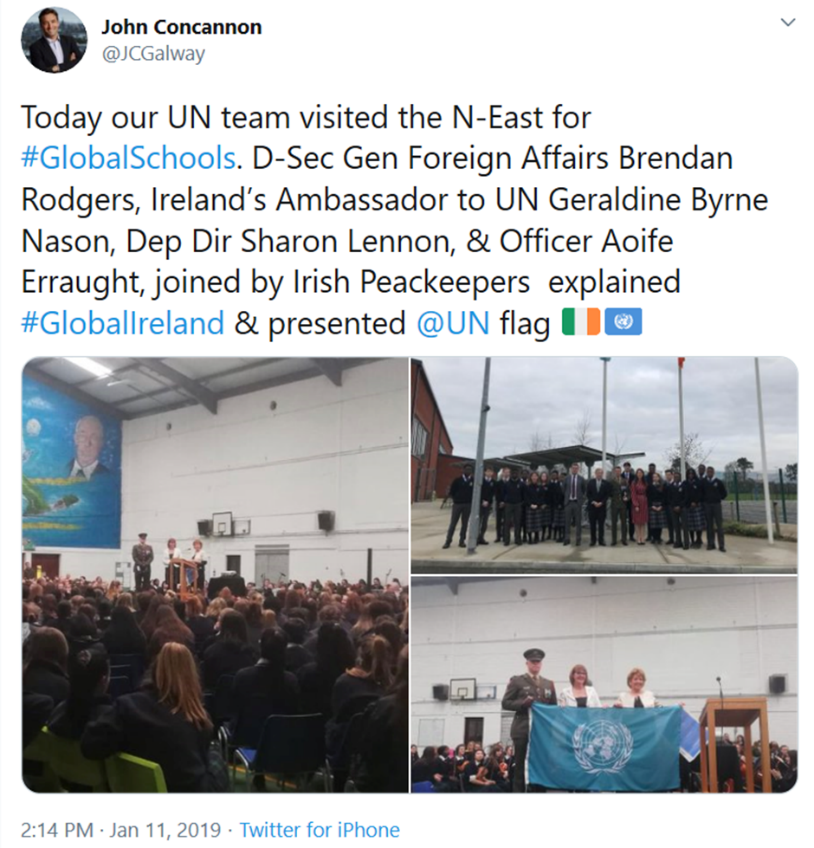 Irish diplomats and peacekeepers are visiting each and every secondary school in the country to engage students about the ‘Global Ireland’ programme – ‘As part of the programme, each school will be presented with a United Nations flag and a copy of the preamble of the UN Charter. The Global Schools programme will allow for a greater understanding of how UN membership has played a significant role in Ireland’s foreign policy and actions - including our contributions to peacekeeping, international development, human rights and disarmament - and how we will continue to do so in the future.’

Predictably in his hour of need, Taoiseach Leo Varadkar has turned to his former ‘Strategic Communications Unit’ guru John Concannon to help with the COVID19 public campaign. Currently the Vice-President of NUIG and working in a part-time capacity on the United Nations ‘Security Council Seat’ campaign, John Concannon was the Director General of and the brains behind ‘Global Ireland’. 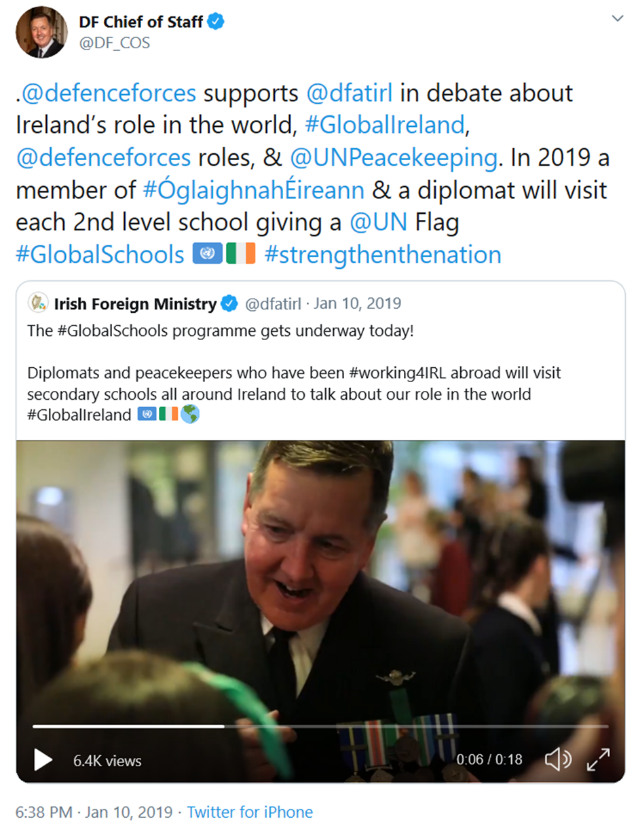 As part of United Nations ‘2030 Agenda’ and its ‘17 SDGs’ (Sustainable Development Goals), Varadkar and Concannon know only too well that the United Nations is insisting that every child, every student and every undergraduate in Ireland must be moulded into Global Citizens as per SDG4 by the year 2030, and they are accelerating these plans as the United Nations 2030 Agenda’s ‘Decade of Action’ breathes heavily down the necks of these United Nations technocrats. 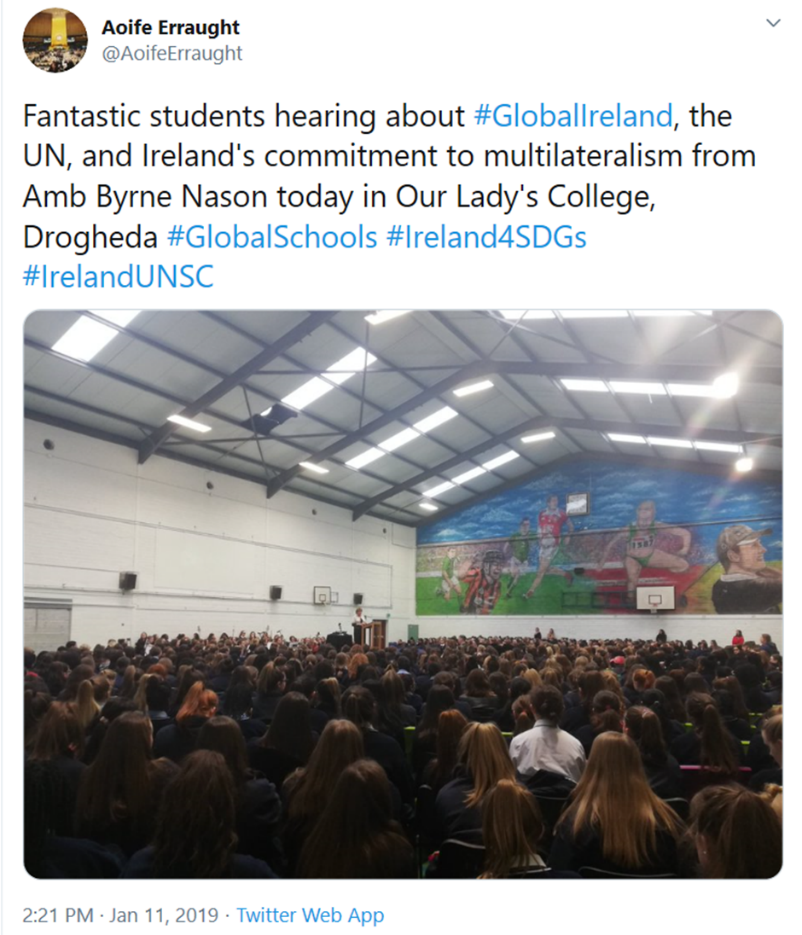 Could this be the reason why this stunt, the hoisting of the United Nations flag in front of the GPO, was risked yesterday? After all, ten years isn’t a lot of time to indoctrinate a whole nation, a nation that is keenly aware of the sacrifices their revered heroes made just over a century ago. Indeed, many of us were raised at our grandparents’ knee, enthralled by stories of the heroic deeds of our beloved ancestors.

Tick tock, tick tock goes the clock…maybe risking the ire of the Irish people is something they have to do!