The suspect has been shot after beheading a history teacher who showed cartoons of Mohommed in class. When will Ireland enjoy the benefits of multiculturalism like our allies in France? Very soon!

A French teacher, who had recently shown students cartoons of the Prophet Muhammed, was beheaded outside his school on Friday.

The man suspected of the beheading was an 18-year-old born in Moscow and originating from Russia’s southern region of Chechnya, a judicial source said on Saturday.

Five more people have been detained over the murder on Friday outside Paris, including the parents of a child at the school where the teacher was working, bringing to nine the total number currently under arrest, said the source, who asked not to be named.

According to the source, the two detained parents had signalled their disagreement with the teacher’s decision to show the cartoons.

The other new people detained for questioning are members of the suspect’s social circle but not family members.

The assailant was shot by police and later died of his injuries.

Early on Saturday, a judicial source told AFP news agency that four people, including a minor, have been arrested in connection to the attack, which took place in the Conflans Sainte-Honorine suburb northwest of Paris.

Those held were related to the assailant. The French anti-terrorism prosecutor opened an investigation into Friday’s incident.

A police official – speaking on the condition of anonymity to The Associated Press – said the suspect, armed with a knife and an airsoft gun, was shot to death by police about 600 metres (656 yards) from where the male middle school teacher was killed.

The killing was described by French President Emmanuel Macron on Friday as a “terrorist attack”.

The teacher had received threats after opening a discussion “for a debate” about the caricatures about 10 days ago, the police official said.

He had shown pupils in his class cartoons of the Prophet Muhammad, which are considered by Muslims to be blasphemous, according to a police source.

The attack took place in the street in front of the middle school where the victim worked. 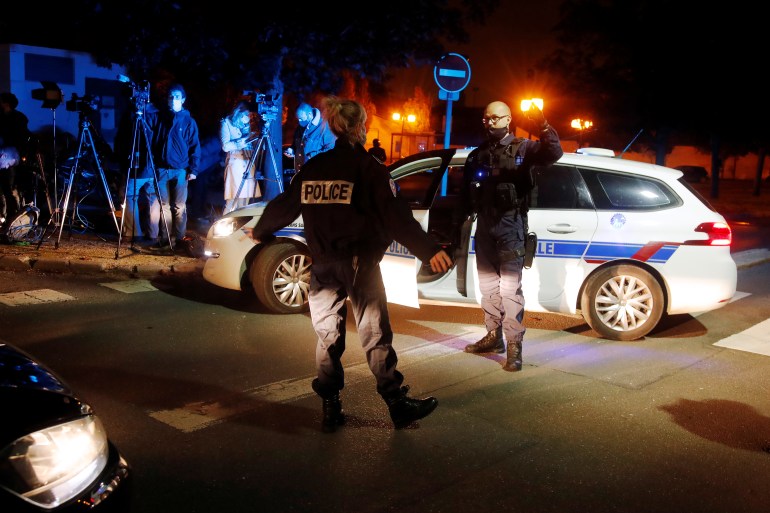 French anti-terror prosecutors said they were treating the assault as “a murder linked to a terrorist organisation” and related to a “criminal association with terrorists”.

The parent of a student had filed a complaint against the teacher, another police official said, adding the suspected killer did not have a child at the school. The suspect’s identity was not made public.

Police on Twitter advised the public to avoid the area. President Emmanuel Macron arrived at the scene on Friday evening.

The mayor of Eragny, Thibault Humbert, praised “the speed with which police neutralised the individual” on Twitter.

French Interior Minister Gerard Darmanin said he had set up a crisis centre to deal with Friday’s attack.

Charlie Hebdo
France has over the past several years seen a series of violent attacks. Bombings and shootings in November 2015 at the Bataclan theatre and sites around Paris killed 130 people.

Late last month, a man who emigrated to France from Pakistan used a meat cleaver to attack and wound two people outside the former offices of satirical magazine Charlie Hebdo.

That was the spot where armed men gunned down employees of the magazine five years ago in retaliation for the magazine’s publication of cartoons of the Prophet Muhammad.

The issue of the cartoons was revived last month when Charlie Hebdo decided to re-publish them to coincide with the start of the trial of accomplices in the 2015 attack.

Al-Qaeda, the group that claimed responsibility for the 2015 attack, threatened to attack Charlie Hebdo again after it republished the cartoons.

The magazine said last month it published to assert its right to freedom of expression, and to show it would not be cowed into silence by violent attacks. That stance was backed by many prominent French politicians and public figures.