The Hand That Rocks The Cradle -Pt4

Money is created out of thin air? OK? sounds a little strange but what real life impact has this process on me? I can still use this "miraculous" money to buy a new sofa, a new car or even a new house! Why worry about where it comes from? Life goes on, does it not?

The truth is, you should be very concerned about this process. When more money is created with the corresponding consequence that  the rest of the money in circulation is worth less than before the flood of new money and less again as the years go on, this is known as inflation. In many respects inflation behaves as a stealth tax that we all pay for the fraud of vast amounts of "new" money being printed ( new as in 'out of nowhere' as opposed to freshly minted replacement bills). This 'new' money operates like a tax on our future generations. With the new issuance the purchase value of the currency depreciates over time  which explains  why houses prices between 1971 and 2016, a mere 45 years, rose by 175% in real terms ( for those suspicious of Germany, houses prices went down 1% between 1968-2016) according to the 'central bank for central banks', the Bank for International Settlements. The price in Ireland  since 1970 increased nominally however by 3,589%. ( Nominal prices are sometimes called 'dollar prices'. This a measure associated with money price  ( not adjusted for inflation) whereas real price are adjustments made against products and services charged over a period  time (which necessarily includes inflation/deflation).

In essence, items we want to buy or services we want to use will keep getting more expensive as long as this monetary system is in place. To mitigate these increased, wages rise alongside these price increments to combat inflation, or at least they did until about 2008 when the world went into recession, caused by sub prime market collapse ( people with questionable or limited credit scores were given loans by unscrupulous banks).

When we say that this system creates money out of nothing in another way the procedure actually does create something; it creates debt. Let me clarify the issue. When Tom takes out a loan it is written down as an asset in the bank but in negative form, call it say a  negative value of money, this negative record, otherwise known as debt, is considered to be actual money.

Marriner S. Eccles, former governor of the Federal Reserve ( 1934-1948) explained it quite clearly,

Therefore, instead of gold being the backbone of our economy, the system is reliant on debt to maintain the entire manufactured edifice which explains why it is sometimes referred to as the 'debt based monetary system'. It attained that lable on the basis that for the systme to operate it requires that debt must  always grow, and with it, the debts of countries and their people. The deeper a country and its people get into debt the better it is for the system. The more debt requires greater issuance of magical money into system and with more magical money in the system the more it devalues the current currency due to a flooding effect. 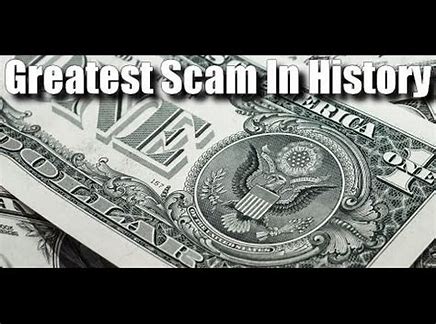 If people and their governments immediately stopped borrowing money and renege on paying back loans this will effect the bouyancy of the system because it needs debt otherwise the money supply shrinks and the system falters.

The Federal Reserve and other central banks control money by adjusting its supply and how much it costs to borrow money, otherwise known as the interest rate.  Recognising the predictability of human psychology and armed with these tools central banks can create booms and busts in the economy at will. They can also distort and derail an economy by disrupting it.

A case study will illustrate the point. In 2000 Federal Reserve Chairman Alan Greenspan cut interest rates to 1%. He did this to try and fight off a recession created by the ".com bubble " encouraging people to borrow money when interest rates were low (if you're borrowing money for instance, to repay a mortgage, the debtor homeowner would make great savings. This 1% interest rate hadn't been seen since the 1950s. It also get people spending rather than saving as interest rates wouldn't make such an activity financially viable due to the low rates of interest).Greenspan's idea was that he could create a wealth effect and so people started to purchase houses ( benefitting from the low interest rates of a mortgage) which had the effect of increasing demand and thus raising house prices. The people would feel wealthier and spend more money in the economy and this Greenspan stimulation plan  succeeded in getting people to borrow money to buy even more houses but they borrowed far too much and outside their credit rating.

The result was the 2008 housing bubble. The US bubble affected markets world wide including Ireland whose banks were a part of this "Ponzi" ( fraudulent investing scam) like system of buying and shipping off sub prime market loans to the next institution. Bondholders who had bought these secured debts at a given price found their investment plummeting as the whole regime came collapsing inwards. We all know what happened next. The Irish people suffered badly when their leaders genuflected to their international masters preferring to guarantee the bondholder's investments and prop up the ailiing gambling banks with State coffers which should have been made available for the funding of necessary services.  This incursive manipulation by central banks demonstrates what can go wrong when central banks interefere  with an economy. While individual bankers behaved corruptly for in their role in the 2008 crisis the Federal Reserve's intrusion had a far bigger long-term impact.

In 1881 the then president of the United States, James Garfield, stated

“ Whosoever controls the volume of money in any country is absolutely master of all industry and commerce and when you realize that the entire system is very easily controlled one way or another by a few powerful men at the top you will not have to be told how periods of inflation and depression originate “.

Benjamin Franklin, one of the founding fathers of the USA, in his autobiography, stated that the prime reason for the American war of independence was a battle over who actually controlled and issued the money of the new colonies yet it appears that such a war was fought in vain.

If sovereignty was real, that authority lay with the people, a people who agree by contract to be governed by men and women whose sole interest be exercised for that  people, then any money that is in their charge ought to be used in the interests of those people. Sadly, this is far removed from the original intentions of any social contract. What has happened, instead, is that the same cabal of wealthy powerful men who created and established, the Federal Reserve in 1913, and all the independent power it wields across the globe, have effectively harnessed the endemic fraud, corruption and moral turpitude of domestic elected officials to do their bidding. The result of this impropriety and treachery is that men and women who feign fidelity to its people instead sell the people; their nation, culture, traditions in bondage for a price.

The philosopher Sophocles stated " money is the worst currency that ever grew in mankind. This sacks cities, this drives men from their homes, this teaches and corrupts the worthiest minds to turn to base deeds". I believe he got it right in part. Money, in of itself, ought to represent something of tangible value that is earned through honest endeavour and can be exchanged for another's honest endeavour or a representation of it. To blame a mere symbol for greed is like blaming the cake for a child's stomach ache. The problem with money applies to those who seek to enrich themselves at the expense of others, and will go at any length to do so. Vast money segues to immense power, and power permeates every nook and cranny of our culture.

While billionaire philantropists divest themselves of money, a pursuit they spent all their lifetime acquiring, there is no " road to Damascus" conversion but the effectuation of a new scheme to engorge their power and wealth. These men and women of great influence are no different to those who established the Federal Reserve in 1913 and vested interests that accompanied it.

In Ireland the men of 1913 have replaced the men of 1916 as the inspiration for those who inhabit the corridors of power in this country. Be it the influence of wealthy corporations, influential international institutions ( UN or EU) or wealthy elite; the common denominator remains. For behind all motivated activities is the familiar of evil spouses; power and money. Where you get an abundance of one, the other is sure to be present. So while Tadgh or Maeve labours hard for their money, sacrificing nobler causes like love of God, nation and family, in that pursuit, their steady graft, unbeknownst to most, is a mere illusion. At the drop of a bankers hat money appears miraculosuly from the ether to go on a journey of processes through manipulated systems that enriches the few, while enslaving the many. The hand that rocks the cradle, a cradle full of 'make believe' money, certainly does rule the world.