Pres. Trump has left hospital after being diagnosed with COVID19. Despite being in the danger groups, the President is completely healthy after a dose of the fake Kung Flu virus.

Donald Trump has walked out of the military hospital where he received an unprecedented level of care for Covid-19 for three days, saying that despite his illness the nation should not be afraid of the virus that has killed more than 210,000 Americans.

A masked Mr Trump pumped his fist as he walked out of Walter Reed National Military Medical Centre on Monday evening towards a waiting SUV that carried him to the Marine One helicopter for the short flight back to the White House.

He said “Thank you very much” to the assembled reporters.

His doctor, Navy Commander Sean Conley, said the president would not be fully out of the woods for another week, but added that he had “met or exceeded all standard hospital discharge criteria”. 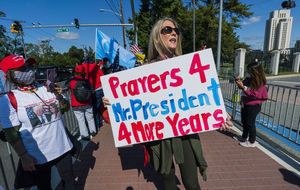 The 74-year-old president is expected to continue his recovery at the White House, where he will be cared for around-the-clock by a team of doctors and nurses.

Even before he walked out of the doors of the hospital, he tweeted that he would be back on the campaign trail soon.

Health officials have been attempting to contact the White House to help with contact tracing after an outbreak which affected president Trump.

But staff with the Washington DC Department of Health have been unsuccessful in trying to connect with the White House and said it had not informed them of any positive results.

Mayor Muriel Bowser said: “We have reached out to the White House on a couple of different levels, a political level and a public health level.”

The lack of communication represents an unwelcome obstacle for the DC government, which has worked to contain the spread of the virus through mandatory mask requirements and limits on the size of gatherings.

Ms Bowser acknowledged on Monday that White House medical officials “have their hands full” at the moment.

But a DC official, speaking on condition of anonymity, said White House doctors have not informed the DC Department of Health of any of the positive test results – a necessary step before contact tracing and quarantining can begin.

The Trump White House has operated for months in open violation of several DC virus regulations, hosting multiple gatherings that exceeded the local 50-person limit and in which many participants did not wear masks. 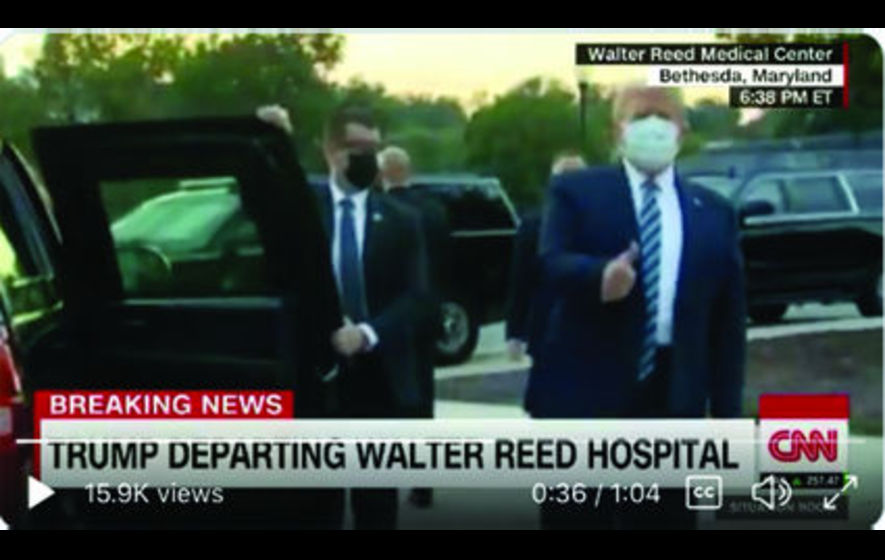 Reverend Jenkins flew in to attend the ceremony from Indiana, a state DC classifies as a virus hotspot – meaning he would have been expected to quarantine for two weeks upon arrival.

Dr Conley was upbeat at an afternoon briefing and said the president could resume his normal schedule once “there is no evidence of live virus still present”. According to the Centres for Disease Control and Prevention, those with mild to moderate symptoms of Covid-19 should isolate for at least 10 days.

Mr Trump’s discharge raises new questions about how the administration will protect other officials. Press secretary Kayleigh McEnany announced she had tested positive for the virus on Monday morning and was entering quarantine.

There were also lingering questions about potential long-term effects to the president — and even when he first came down with the virus.

Dr Conley repeatedly declined to share results of medical scans of Mr Trump’s lungs, saying he was not at liberty to discuss the information because the president did not waive doctor-patient confidentiality on the subject. Covid-19 has been known to cause significant damage to the lungs of some patients.

The physician also declined to share the date of Mr Trump’s most recent negative test for the virus — a critical point for contact tracing and understanding where he was in the course of the disease.

Mr Trump’s nonchalant message about not fearing the virus comes as his own administration has encouraged Americans to be careful and take precautions to avoid contracting and spreading the disease as cases continue to spike across the country.

For more than eight months, his efforts to play down the threat of the virus in hopes of propping up the economy ahead of the election have drawn bipartisan criticism.

Only a day earlier, he suggested he had finally grasped the true nature of the virus, saying in a video: “I get it.”