Twenty retired French generals have called for military rule if Emmanuel Macron fails to halt the 'disintegration' of the country 'at the hands of Islamists', in an open letter published ahead of next year's presidential election.

The open letter, published in Valeurs Actuelles, a right-wing news magazine, claims a military coup might be necessary to stop a 'civil war' in France.

The letter has been condemned by Macron's government, who compared it to the failed coup by generals against President de Gaulle 60 years ago.

However, far-right National Rally leader Marine Le Pen hailed the letter, which was signed by 80 other retired officers, as well as the 20 generals. 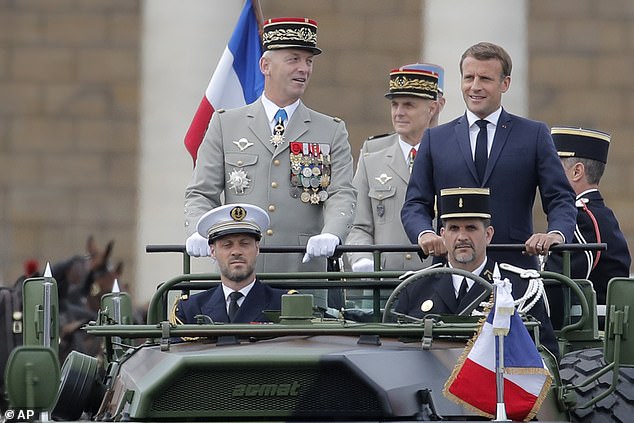 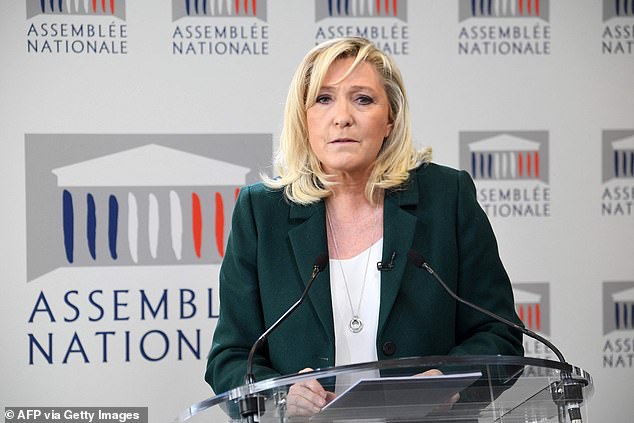 The lead signatory was Christian Piquemal, 80, who commanded the Foreign Legion before losing his privileges as a retired officer after being arrested while taking part in an anti-Islam demonstration in 2016.

It was written by Jean-Pierre Fabre-Bernadac, a former officer, and signed by 1000 others who were in lower ranks.

The incendiary letter reads: 'France is in danger. Several mortal perils threaten her. Even in retirement, we remain soldiers of France and cannot in the present circumstances remain indifferent to the fate of our beautiful country.'

The retired officers claimed that France was 'disintegrating with the Islamists of the hordes of the banlieue [suburbs] who are detaching large parts of the nation and turning them into territory subject to dogmas contrary to our constitution'.

Macron also came under fire with the retired officers blasting the state for allowing brutal police action against yellow vest protesters in the country.

In a chilling call, the letter claimed that the country would 'explode' into civil war if 'nothing was done', which would lead to the deaths of thousands.

They also claimed they had broad support in the military and were 'ready to support' politicians who focused on the 'safety of a nation'. 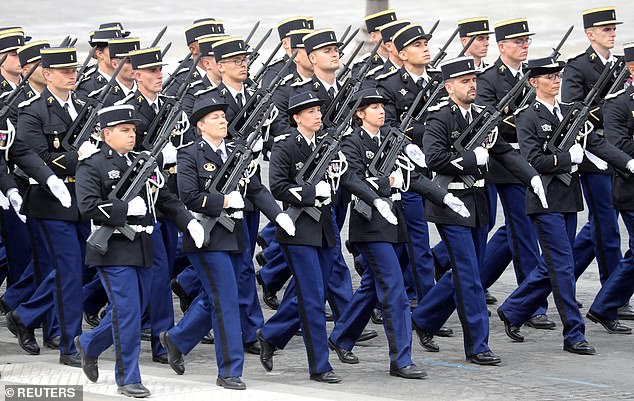 The lead signatory was Christian Piquemal, 80, who commanded the Foreign Legion before losing his privileges as a retired officer after being arrested while taking part in an anti-Islam demonstration in 2016. It was written by Jean-Pierre Fabre-Bernadac, a former officer, and signed by 1000 others who were in lower ranks

The thinly-veiled declaration of support was seized upon by far-right Le Pen, who wrote on the site of the magazine where the letter was published: 'I invite you to join our action and take part in the battle that is opening and is above all the battle of France. As a citizen and as a woman politician, I share your suffering.'

National Rally added that the letter reflected the views of 'patriots' like General Pierre de Villiers, former chief of the defence staff, who was sacked by Macron in 2017.

France's Armed Forces minister Florence Parly reacted with fury to the letter and said a coalition between politicised former military personnel and far-Right presidential candidate Le Pen would be an outrage.

Ms Parly said: 'The irresponsible column published in Current values is only signed by retired soldiers, who no longer have any function in our armies and only represent themselves.'

Expressing her anger further on Twitter, Ms Parly said 'neutrality and loyalty' were two principles that were crucial to military conduct.

If Le Pen was to replace Emmanuel Macron as President of France following elections next year, she would become head of the country's Armed Forces.

'Madame Le Pen's words reflect a serious misunderstanding of the military institution,' said Ms Parly. Ms Parly said this was 'worrying for anyone who wants to become head of the Armed Forces.'

Ms Parly continued. 'The politicisation of the Armed Forces suggested by Madame Le Pen would weaken our military capability and therefore France.

'The military are not there to campaign, but to defend France and protect the French.'

France's current Fifth Republic has been threatened by military coups in the past, notably by far-Right activists who were eventually defeated as they tried to keep the former North African colony of Algeria.

There are some five million Muslims in France - the largest community of its kind in western Europe - and many have backgrounds in former colonies, such as Algeria.

The Rassemblement National used to be called the Front National (National Front), and was founded by Ms Le Pen's father, the convicted anti-Semite, racist and Islamophobe, Jean-Marie Le Pen.