Who Is Behind Lucan's New Mosque?

Lucan is set to experience another plantation. Even while under Level 5 lockdown the elites expect you accept your replacement by Islamic invaders with a smile.

Despite residential complaints and planning objections, An Bord Pleanála last week gave the rubber stamp on the development of a purpose built Islamic centre and mosque in the West Dublin town of Lucan.

The proposed site is to be located just off Newlands Road near Liffey Valley with the original plans wanting a three storey domed building totalling 6,170sqm along with children’s play facilities. Per recommendations of authorities the mosque was scaled down to 4,260sqm and restricted to two stories as well as an underground car park with the minaret kept to 20.3 metres rather than a proposed 23.8 metres.

In public documents from An Bord Pleanála, the list of objections to the site were laid out, listing concerns over overdevelopment, privacy and traffic congestion.

Key to the approval was Fr. John Laizer of the nearby Parish of Divine Mercy and South Dublin Football League who granted permission for mosque attendees to use parking facilities for Friday prayers and Islamic festivals.

While a sizable Islamic community has been present in the town since 2000, it has been semi-itinerant without a fixed abode. forced to use at various junctions locations such as Griffeen Valley Educate Together School and more recently South Dublin Football League in Ballyowen Park to host prayers and festivities.

A product of intense lobbying by the South Dublin Maktab charity, the plans garnered the support of local councillors Paul Gogarty (Independent but a former Green TD) and the Swedish born Madeleine Johansson (PBP).

Among those objecting to the construction of the centre is the ‘Balgaddy Working Together Community Group’ which accumulated 200 local signatures in opposition to the plans citing issues of privacy and traffic congestion in what is very clearly an overdeveloped area.

Representing South Dublin Muslims and incorporated as a charity in 2014, Maktab is taking the lead on the development plans including the fundraising for the proposed mosque. With costs expected to run just shy of €1.2 million and with only a sixth of the total funding raised according to Maktab through either loans and donations, one is unsure how the balance will be raised.

While Maktab boasts of a variety of fundraising initiatives to raise money, from barbeques to car boot sales, it would not be the first time the financing of a mosque in Ireland has stirred controversy. The Clonskeagh Mosque has incurred years of controversy for its bankrolling by Hamdan bin Rashid Al Maktoum of Dubai’s royal family, who is also a major donor to Trinity College Dublin.

According to financial records obtained by this publication, Maktab is surprisingly well off, with €575,000 in fixed assets and cash reserves of €438,000 as of December 2018. One can easily foresee the prerequisite funds being found for the plans without much issue looking at these figures. 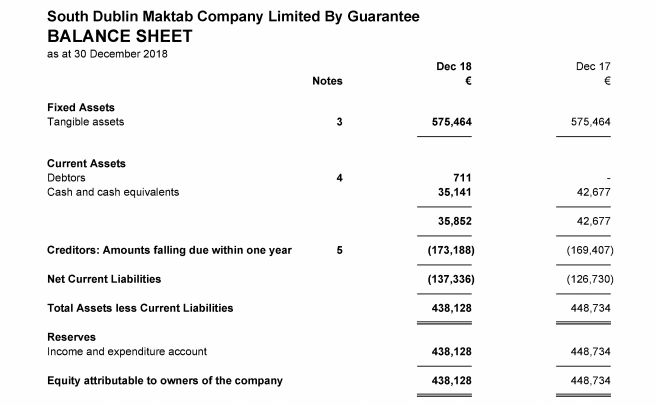 Noted in census figures as being an area of high population growth largely driven by mass immigration, such a development was something of an inevitability in Lucan given the slow boiling demographic change in that particular part of Dublin West.

While Ireland has enjoyed something of a breathing space demographically in comparison to other European nations, we are now entering a period whereby our Islamic population will imprint itself firmly onto our national landscape.

Along with the tacit support of the Catholic Church in allowing the use of parking facilities, eyebrows must be raised at the support given to the proposed mosque by two very progressive politicians Paul Gogarty and Madeleine Johansson of People Before Profit. While both politicos and PBP in particular have led the charge for the secularisation of Irish schooling, how can they now square that with their support for an Islamic madrassa facility.

While the die is not fully cast on the Lucan centre, it is incumbent on locals and nationalists to muster an effective and immediate response should they wish to prevent the altering of their parish, even going beyond arguments of traffic congestion and affirming the Irish character of the area against an Islamic incursion.

The roadmap for Lucan should they do nothing, like many Irish towns in time, is laid out in innumerable cities such as Bradford and Tower Hamlets, which found themselves demographically and civically consumed by a buoyant Islamic population within a generation of initial bridgeheads.

The cause of the demographic change which is occurring presently in Lucan lies at the feet of liberal social engineers who have sought to blindly alter our societies with the tool of mass immigration. A corollary of this means it is incumbent on those of patriotic mind to prevent these changes while holding no major venom towards Muslims in Ireland caught up as third parties.

We are mature enough to realise that in the majority the Islamic community are decent folk merely wishing to live out their lives per their traditions. However we are also mature enough to understand the matter at hand is territorial. Lucan was, is and will continue to be an Irish town and has every right to vindicate that fact.