Christian Mosaics To Be Covered At Hagia Sophia!

On 1 July 2016, Muslim prayers were held again in the Hagia Sophia for the first time in 85 years. In November a lawsuit was filed for converting the museum into a mosque. Now our Christian heritage is to be covered during Islamic prayer!

ISTANBUL -- Christian mosaics at Hagia Sophia will be covered during prayer after its conversion into a mosque, Turkey's ruling party has decided, as the country prepares to reopen the historic structure for worship despite mounting international criticism.

The conversion has triggered debate regarding the treatment of Christian mosaics, frescoes and other artwork inside the building. An AKP spokesperson on Monday said the plan was to cover them with a curtain or lasers during Muslim prayer, though it is unclear how this would work in a structure more than 50 meters tall.

UNESCO has warned that altering the site without prior consultation could be a breach of the 1972 World Heritage Convention.

Initially built 1,500 years ago as a Byzantine cathedral, then turned into a mosque by the Ottoman Empire, the Hagia Sophia is known for its unique blend of Christian and Islamic characteristics. For example, there is an image of Jesus Christ and the Virgin Mary on the ceiling above the mihrab, a niche in the wall indicating the direction of Mecca.

The landmark was turned into a museum in 1935 by Kemal Ataturk, the founder of modern Turkey, as a symbol of the country's embrace of secularism. But Turkey's ruling Justice and Development Party, or AKP, has reverted the site to a mosque, with the first prayer scheduled to be held July 24. 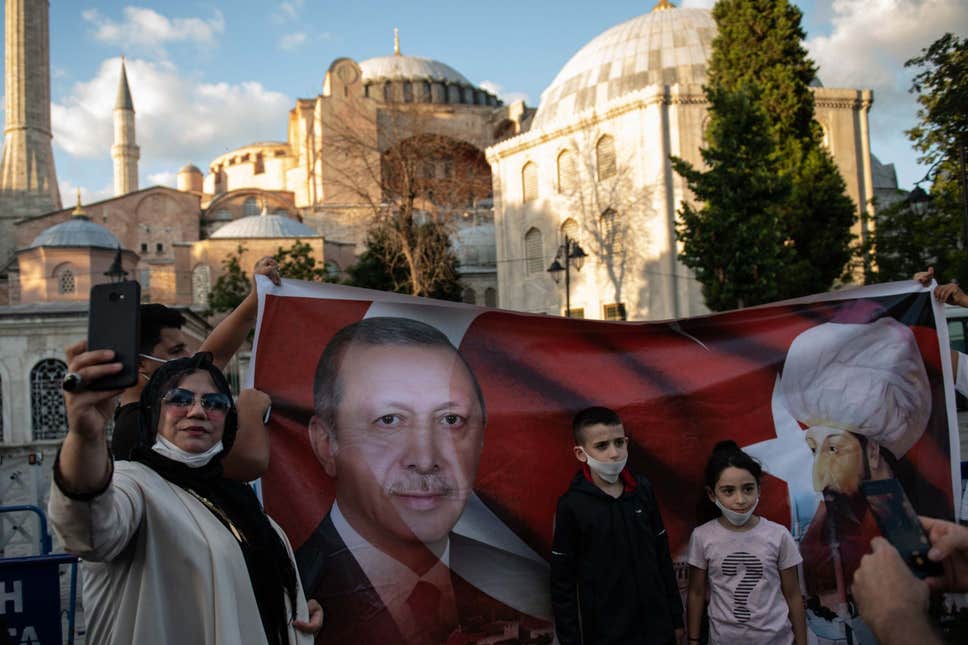 The mosque conversion also will alter tourism. Hagia Sophia attracts more than 3 million visitors a year, and Turkish President Recep Tayyip Erdogan has stressed it will remain open to all. The current 100 lira ($15) entrance fee will be scrapped, so it can be visited for free like with other mosques.

But mosques generally do not allow non-Muslims during prayer, and some sections are covered in rugs and remain off-limits even when visitors are allowed. Tourists could face similar rules at Hagia Sophia.

The conversion has generated significant resistance. The U.S. and the European Union have expressed disappointment in Turkey's decision. The Greek and Russian Orthodox churches oppose the move, given that Hagia Sophia has served as a symbolic center for the Orthodox faith for a millennium, while Pope Francis said he was "pained" over the situation.

Reception has been cool among Arab governments. It remains to be seen how Turkey will balance Hagia Sophia's renewed identity as a mosque and its historical heritage.